On August 24, the world lost a great luminary of contemporary Orthodoxy, His Eminence Kallistos (Ware), Metropolitan of Diokleia.

His Eminence encouraged and inspired the founders of the International Orthodox Theological Association to create the Association through conversations at the Council of Crete (2016). When the plans for IOTA’s creation began in earnest in 2017, Bishop Kallistos continued to support us. During the leaders’ meeting in Jerusalem in January 2018, a consensus emerged that His Eminence would be IOTA’s first choice for a keynote speaker at the Inaugural Conference dedicated to the theme of pan-Orthodox unity and conciliarity. The main reason for this is that Metropolitan Kallistos was deeply concerned about the problem of Orthodox jurisdictional divisions and embodied the spirit of pan-Orthodox unity. We were overjoyed when His Eminence responded to our invitation immediately and enthusiastically, despite the fact that at the time he was undergoing cancer treatment.

Miraculously, he was able to join us in snow-covered Iasi, Romania in January 2019, where he gave the keynote address, was a concelebrant at a Sunday Liturgy, and joined us at the conference sessions. On the occasion of the publication of our conference volume, Pilgrims Toward the Kingdom: The Beginnings of the International Orthodox Theological Association (2020), His Eminence wrote:

“The International Orthodox Theological Association is performing a ministry essential for the life of the worldwide Orthodox Church, and it is a ministry that no one else at present is fulfilling. As Orthodox thinkers and pastors we have everything to gain by keeping closely in touch with one another, both through publications and still more through personal contacts at conferences. Long may it continue to flourish!” (p. iii)

In 1966, Timothy was ordained a priest and became a monk with the name Kallistos. His scholarly articles as well as his collaboration in the translation of the Philokalia collection of ascetical writings from Greek into English reflected his deep immersion in the monastic tradition of the Christian East. He embodied the best qualities of an Orthodox monastic: wisdom and discernment, humility and simplicity, gentleness and charity. He was also full of good humor and enjoyed a glass of scotch on occasion. More importantly, his complete dedication to Christ and the Church transformed and enhanced his dedication to the life of the mind. 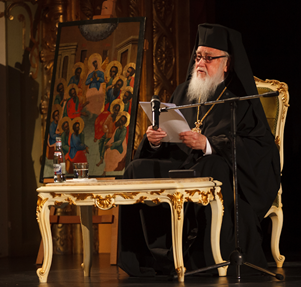 Educated at Oxford, he was appointed Spalding Lecturer in Eastern Orthodox Studies at the University in 1966, a position he held for 35 years until his retirement. As a lecturer and advisor, he influenced a generation of Orthodox scholars in the United Kingdom and beyond. His second classic The Orthodox Way (1979) appeared three years before he became a titular bishop of Diokleia, serving the parishes of the Ecumenical Patriarchate in Great Britain. During this time he became a major spokesman for the Orthodox faith. Perhaps his greatest gift was to convey the fullness of the faith in a form that was accessible and captivating for a lay audience. Through him, tens of thousands have come to know Christ within the fold of the Orthodox tradition. For so many of us his lecture-sermons and essays on the central mysteries of the faith – the trinity, incarnation, Church, worship, sacraments, life of prayer, and the purpose of asceticism – were a source of nourishment and inspiration. His deep immersion in the patristic tradition and the liturgical life of the Church drew people to him because he practiced what he taught.

As His Eminence was a great example of an Orthodox teacher, monastic, missionary, and pastor, we wish to dedicate the IOTA Talks to be recorded at our upcoming conference in Volos, Greece to his memory.

May he rest with the saints and may his memory be Eternal.

Paul Gavrilyuk (on behalf of the IOTA Board)
Church New Year, September 1, 2022