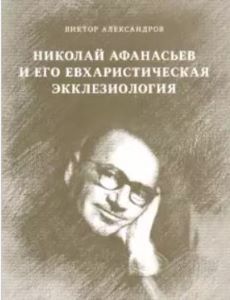 Nicholas Afanasiev (1893–1966), a Russian Orthodox historian of the early church who specialized in the early councils and canonical decrees, today is best known for his contributions to ecclesiology: he was the first to describe, systematize, and propose historical and theological justifications for the so-called eucharistic ecclesiology. Although this term served as a singular universal inspiration for ecclesiology over the past 50–60 years and produced a great number of ecclesiologies that considered themselves fundamentally “eucharistic,” most of them tended to criticize Afanasiev or even distance themselves from him. It was Viktor Alexandrov, a historian and theologian who resides in Budapest and serves as a member of the editorial board of the oldest Russian Orthodox journal still in print, Vestnik RHD (in print since 1925), who was the first Afanasiev scholar to realize that the vast majority of the criticism directed at Afanasiev’s eucharistic ecclesiology demonstrates a lack of familiarity with his works. The study of Afanasiev became Alexandrov’s lifelong passion, whose crowning achievement is his editing of the fullest to date collection of Afanasiev’s essays, The Church of God in Christ: Collection of Essays, published in Russian in 2015. This collection, put together by Andrej Platonov in collaboration with Alexandrov, is supplemented with detailed biographical information and well-researched notes on Afanasiev’s works.

The book under review, Nicholas Afanasiev and His Eucharistic Ecclesiology, is the fruit of ten years of Alexandrov’s personal efforts at understanding Afanasiev’s ecclesiology. As Alexandrov warns the readers from the start, the book is not a comprehensive study of Afanasiev, but rather a collection of essays written at different times and then edited for the current edition. This collection notably includes substantial biographical information as well as Alexandrov’s own theological reflections. It is written with obvious fondness for the subject, but does not slip into blind apologetics.

What stands out in this book is that Alexandrov engages with Afanasiev not only as a theologian but as a historian. Afanasiev considered himself a historian first and his overall goal was historical in nature. In the course of his studies of scriptural, patristic, canonical, and, uncharacteristically for his time, liturgical sources, he reconstructed the earliest ecclesiology that he called eucharistic. Afanasiev summarized his pursuit in the Preface of The Church of the Holy Spirit, clearly describing his project as historical in nature:

My study is an attempt to revise the history of primitive Christianity from the perspective of eucharistic ecclesiology…. Familiar facts then acquire new meaning and importance. A number of existing problems are thus removed but new questions arise. On the other hand, the significance of subsequent ecclesial history will appear differently because we will be viewing the Church’s history in a manner radically different from that to which we were accustomed.

Alexandrov is one of the few who has fully understood the tri-fold nature of Afanasiev’s project: to study the life of the early church, to hypothesize concerning ecclesiological views of the early church, and to apply these views to perennial theological questions like the relationship between the royal and the ordained priesthood and, most importantly for Afanasiev, the nature of Christian confessional divisions. Although Afanasiev is best known for the latter achievements, it is his historical work that holds the key to understanding his ecclesiological vision. Therefore, Alexandrov’s main goal is to return to Afanasiev’s historical methodology in ecclesiology. In Alexandrov’s evaluation, Orthodox ecclesiology as a whole abandoned this path when it followed the dogmatic methodological approach of John Zizioulas, even though Afanasiev’s method found its reflection in the liturgical theology of Alexander Schmemann.

Alexandrov’s attempt to engage with Afanasiev as a church historian and to analyze the validity of Afanasiev’s method is a key contribution of this volume. Here Alexandrov makes one (among many) interesting observation that is relevant to contemporary ecclesiological discussions in the Orthodox Church: Afanasiev never held that “one city, one bishop” was one of the fundamental principles of eucharistic ecclesiology. As Afanasiev would have put it, geography is not a theological principle by its nature (but rather a matter of historical accident) and it cannot serve as a fundamental ecclesiological principle.

A notable shortcoming of this volume is the absence of a chapter/essay on royal priesthood. This absence seriously hinders the presentation of Afanasiev’s vision of the ministries in the Church and his understanding of priesthood. This is not a criticism of Alexandrov, who is well acquainted with all of Afanasiev’s works, but rather a warning for those less familiar with the original sources to remember that this book from its first page declares its incompleteness. While one can argue with Alexandrov on details (like whether he fully grasps Afanasiev’s position on bishop vis-a-vis presbyter), it is absolutely clear that the author is engaging with Afanasiev with full knowledge of his work and complete scholarly integrity. Even when Alexandrov tries to develop certain questions farther than Afanasiev did—like the ecclesiological correlation between modern parishes and diocese, or the prospects of reception as a mechanism that can mitigate the juridicism of ecclesial governance and teaching—he does so by using Afanasiev’s genuine eucharistic ecclesiology as a point of departure.

Almost seventy years ago Afanasiev inspired theologians by coining the phrase “eucharistic ecclesiology.” Perhaps, today, learning what lies behind the phrase will be equally inspiring. Alexandrov’s slim volume tightly packed with biographical facts and ecclesiological insights is a step in the right direction.