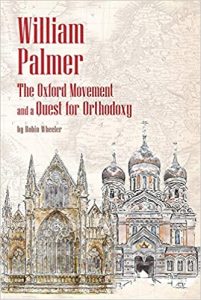 William Palmer (1811–1879) was a rather eccentric English theologian and publicist, who kept his eyes on the Orthodox Church throughout his life. He was one of the first Englishmen to fully appreciate the theology of the Eastern Church, even though he never took the final step of converting, because he could not put aside his principles. In 1855, after both father figures in his life had passed away, he travelled to Rome, where he was accepted as a member of the Roman Catholic Church and spent the last two-and-a-half decades of his life in a less exposed and forward manner than the preceding ones.

This book is an excellent exposition of William Palmer’s life and thought, based on the doctoral thesis of Robin Wheeler, who came to theology after spending most of his life as a barrister and in the Royal Army. The thesis was originally published with a small print run by Peter Lang in 2006 (as Palmer’s Pilgrimage: The Life of William Palmer of Magdalen), and Holy Trinity Seminary Press acquired the rights to republish it under a slightly different title in 2021. This re-publication process has left small marks on the book, but the fascinating story of William Palmer, who has remained a rather little known figure until today, is not impinged.

Palmer remained a solitary soul until his death, never wanting to associate himself fully with any movement or theological trend. The Oxford Movement in the title is thus somewhat misleading, as Palmer did not see himself as part of it. The movement’s primus motor, John Henry Newman, nevertheless regarded him as a true and loyal friend, holding the same ideals as the movement. This relationship is, however, only alluded to in the book. It is not a book suitable as an introduction to either the Oxford Movement or Anglican–Orthodox relations, as it has a narrow focus on its protagonist. There is some context provided, but not nearly enough to fully comprehend Palmer’s surroundings without extensive prior knowledge of nineteenth-century Anglicanism. The narrative structure and its psychological depth, as well as the number and nature of the sources employed, call to mind the classical biographies of the Oxford Movement actors by David J. Newsome (The Parting of Friends: The Wilberforces and Henry Manning [1966, reprint 1993] and The Convert Cardinals: John Henry Newman and Henry Edward Manning [1993]). While the latter were written for an audience that knew the protagonists and their context very well already, the re-publication of the book on William Palmer seems to aim at a wider audience. Moreover, Palmer pursued a less exposed and more complex theological journey than most of the Oxford Movement, making his biography less teleologically comprehensible.

For Palmer was an Ecumenist, maybe one of the earliest and certainly one of the quaintest and most stubborn of the nineteenth century. Just like the Oxford Movement, which blossomed while he was a scholar in Oxford, Palmer sought to demonstrate the catholicity of the English Church in the face of the conflicting claim to universality from the Roman Church. Unlike Newman and the other Tractarians, however, he was convinced it was necessary—and theological expedient—to join hands with the Russian Orthodox Church to refute Roman papal “heresies.” The only correct way to do this was to thoroughly study the Russian Church and its theology and then use this knowledge to convince it of the catholicity of the English Church. The plan was grandiose and would possibly have had a chance of success, but several obstacles hindered its execution. For one, William Palmer for reasons of conscience never rose beyond the rank of a Deacon in the Anglican Church, considerably weakening his bargaining position, which was already weak because he had no prominent backers in England. Moreover, his stubbornness ensured that he could not settle for any compromise solution. Finally, there were always geopolitical factors at play interfering in the theological discussions.

Nevertheless, Palmer must be credited for bringing knowledge of the Anglican Church to Russia, enabling the Russians to differentiate between the churches issued from the Reformation. Moreover, Palmer’s publication activities did help make Russian Orthodoxy more well-known in the English-speaking theological world. A famous correspondence between William Palmer and Aleksei Khomiakov ensued, which shows what was at stake. Palmer insisted on proving that the Anglican Church—from which he was himself increasingly alienated—was the universal, Catholic Church as it existed in England, while Khomiakov tried to convince him that the Church is a mystical body not to be comprehended by rational evidence and logical reasoning, but simply experienced. Khomiakov rightly predicted that Palmer’s spiritual path would lead to Roman Catholicism if he would not leave his rationalistic thinking behind.

Most of the chapters in the book are chronologically ordered, with the exception of chapter 12 on the correspondence with Khomiakov, which functions as a theological centerpiece of the book. The chapters on Palmer’s childhood, Oxford years, and first visit to Russia are vastly more substantial than the later chapters on his journeys in the Levant and his years in Rome, but that feels correct, as the reader has become acquainted with his character and realizes that the most important part of his life has passed. That is also the realization of Palmer himself towards the end of his life: he started to regret not having taken an easier path at times, recognizing his uncompromising attitude.

His choice to convert to Roman Catholicism in 1855 was, as he himself mentioned, not an intellectual one, but purely effected to achieve peace. Until then, he had repeatedly tried to reconcile his intellectual agreement with Eastern Orthodox theology with the perceived inconsistencies of real Orthodox Church life. The Russian Church was to him too entangled with secular authority, whereas the Greek Church was provincial and caught up in internal squabbles and Ottoman ceremoniality. Most importantly, the Greeks insisted on his rebaptism, while the Russians would accept him by chrism. In Palmer’s mind, this inconsistency ran counter to the catholicity of the Orthodox Church. He therefore settled on the more visible catholicity of the Roman Church over and above his theological agreement with Eastern Orthodoxy.

As mentioned above, the re-publication has left some small marks on the volume, including occasional erroneous formatting, especially around quotes, but most apparent in the back matter. The somewhat arbitrary choice of source contextualization also makes the book less useful as a reference work. It is often unclear whether the source referred to is the original or a published version and, in case of foreign language quotations, who is responsible for the translation into English. French and Latin quotations have not been translated at all, even though there sometimes are explanations in the notes. That William Palmer’s own notes during his first visits to Russia are referenced as John H. Newman’s publication Notes of a Visit to the Russian Church from 1882 is nowhere explained, for example.

Nevertheless, these minor editorial shortcomings do not detract from the smooth narrative and competent style of the author, who is able to bring William Palmer, an important though often disregarded figure in the theological history of nineteenth-century England, into the limelight. The obvious sympathy for Palmer’s cause that is present throughout the book and the masterful contextualization, albeit at times limited, takes the reader on a vivid journey to a different theological environment almost two centuries ago. For a deeper understanding of the budding ecumenical thought at a time when catholicity as the distinctive feature of future church unity was slowly being replaced in the Protestant world by compromise, this book can wholeheartedly be recommended. It requires prior knowledge of nineteenth-century Anglicanism, though, as it focuses on a rather marginal and ambiguous, though highly interesting figure, who with this book finally receives the biographical recognition he deserves.