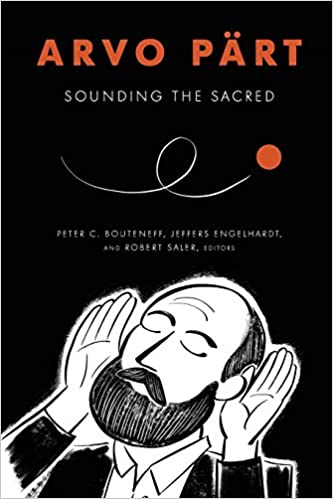 Eastern Orthodox composer Arvo Pärt (b. 1935) is well-known and much beloved for his classical and religious, often transcendent, music which has transported his listeners for decades. Arvo Pärt: Sounding the Sacred represents a marvelously interdisciplinary and impressively consistent collection of substantive contributions which draw from sound studies, musicology, theology, history, performance studies, phenomenology, and ethnomusicology to further contextualize Pärt’s contributions. The energy, dynamism, and collegial tone of these essays bear witness to their emergence from a conference of the same name which was held at St. Vladimir’s Seminary in May 2017. The collection’s fourteen essays are organized into five distinct parts. These include (1) a two-essay introduction which situates the book’s distinctive approach to Pärt; (2) history and context, including detailed and suggestive treatments of Pärt’s interface with children’s puppet theatre, Flemish polyphony, verbal and silent texts, Soviet (and American and British) cinematic scores, as well as the student culture of 1970s USSR; (3) performance, a section comprised of an interview between editor Peter Bouteneff and conductor Paul Hillier and a piece on the dialectical relationship between sound and silence in Pärt’s compositions; (4) materiality and phenomenology, with intriguing essays on the interplay of the material acoustics of Pärt’s inventive compositional technique of tintinnabulation and a kind of silence construed not as cessation of music but rather “nonrepresentational, nonfigurative sound” (134); on temporality and Pärt’s “medievalism”; and the phenomenality of touch, especially the touch of a human body poised at an instrument. The final set of essays is (5) on Pärt and theology from both Christian and Sufi perspectives, the latter of which connects Part’s music to the phenomenon of longing for ultimate union with the divine through Qur’anic and philosophical Sufi texts in addition to 13th and 14th century Sufi poetry and music.

If a collection of such a methodologically diverse set of essays could be said to have one fundamental theme or argument, by my lights it would be the resolute embrace of the physicality, embodiedness, and embeddedness of music in general and of Arvo Pärt’s music in particular. This theme is clear not only in the authors’ explicit turn to performing, composing, and listening bodies and to the phenomenon of sound itself as an embodied experience, but also in the more historical and musically technical chapters which re-narrate the trajectory and the character of Pärt’s career as a working artist who is “historically embedded” in “contingency and embodied finitude” (5). The book states explicitly—then sounds and resounds—what may have seemed obvious but was not necessarily so, at least in the broad reception of Pärt to date: namely, that “music is sound…a phenomenon of vibrating matter or oscillating energy, materially mediated to fleshly bodies” (3). From all quarters the collection effectively chastens both the temptation to ascribe a monolithic or homogeneous character to Pärt’s music, which was in fact subject to all manner of exigent conditions, as well as the temptation to de-materialize or etherealize it into something out of time, into the merely spiritual, mystical, or unworldly. One of the notable ways in which the book stays grounded is in its judicious employment of various kinds of source material. For example, Kevin Karnes’s “Arvo Pärt’s Tintinnabuli and the 1970s Soviet Underground” recovers connections of Pärt with the experimental underground music scene through a reliance upon artifacts like unpublished Russian language archival sources, video footage, programs, posters, and recordings. Other essays, like Lingas’s “Christian Liturgical Chant and the Musical Reorientation of Arvo Pärt” and Cizmic-Helbig’s “The Piano and the Performing Body in the Music of Arvo Pärt: Phenomenological Perspectives,” rely upon Pärt’s personal notebooks, interviews, and, in the latter case, a charming first-person phenomenological account of learning to play Für Alina for the first time. The inclusion of the adapted conversation between Bouteneff and Hillier is a delightful exchange of insights expressed in a dynamic back-and-forth dialogue, enlivening an already lively text.

Given both the immediate readership of Orthodox intellectuals and professionals as well as my own disciplinary training (and limitations), I will be focusing primarily on a selection of the more theologically-inflected essays rather than those technical or musicological. As a whole, the essays which that either a theological starting point or at least a theological turn seem to grasp well Bouteneff’s introductory caution: namely, that a narrow or doctrinaire theological reading of Pärt’s music is deeply problematic and can result in the “binding [of] either the reader or the composer to a fixed interpretation” (6). Happily, the theological essays in this collection are all generative, generous, and gestural, opening rather than foreclosing the meaning of Pärt and all its myriad possibilities.

Of particular interest to the Orthodox reader may be those essays which highlight the theologically rich relationship between text and music, sound and silence, presence and absence, finitude and infinitude. In the second half of his “The Sound—and Hearing—of Arvo Pärt,” Peter Bouteneff draws out the Johannine fundament of Pärt’s silent-text compositions by appeal to the latter’s famous assertion that “Sound is my word. I am convinced that sound should also speak of what the Word determines. The Word which was in the beginning” (16). That is to say, the sacred texts “behind” the music are not only functioning as proximate cultural and religious influences which contour the compositions but rather more as deep testaments to Pärt’s Orthodox Christian faith, such that the music that his listeners hear is in fact this faith translated into the idiom of music “in a form that requires neither piety nor explicit belief” (18). Andrew Shenton’s “The Rest is Silence,” while offering a robust taxonomic account of technical deployments of silence across Pärt’s oeuvre, also frames the phenomenon of silence theologically, identifying (in pace with work done elsewhere by Bouteneff and others) certain resonances between Pärt’s music and the dialectic of apophasis (negative theology) and kataphasis (positive theology), as well as the Eastern Orthodox practice of hesychastic prayer. In the specifically theological section of the book, Robert Saler’s essay echoes the appeal to apophasis and kataphasis, divine veiling and theophany, unsaying and saying, by considering the mutually informative ways in which Pärt’s music can serve as a constructive resource for thinking about divine presence and absence and vice versa, ultimately identifying in Pärt’s canon an approach to music that “presences absence” (205). Ivan Moody’s contribution, “The Materiality of Sound and the Theology of the Incarnation in the Music of Arvo Pärt,” appeals to Marian and trinitarian iconographic traditions as well as Pärt’s Nunc dimittis, Passio, and the Stabat Mater in order to argue for how, however intuitively, Pärt’s compositions bear and even transmit a deeply incarnational character. The Incarnation here is read in the broadest possible sense, including not only the Incarnation of Christ proper but extending temporally from Christ’s birth, life, passion, and resurrection, all the innumerable ways both theologically and, by analogy, musically, in which infinity is contained “within a space defined by the human condition” (218).

One of the most valuable contributions that the collection makes as a whole is the way in which it self-consciously challenges the prevailing narrative and the received, conventional view of Pärt’s life and work, including the operation of simplicity as his guiding compositional principle, the extraneous or irrelevant status of the film scores, an extravagantly “teleological” reading of the place of the language of tintinnabuli across Pärt’s complete oeuvre, or an overly ossified periodization of Pärt’s working life, particularly vis-à-vis a certain skepticism regarding the so-called “silent years.” The three editors have assembled an all-star, international team of contributors with diverse backgrounds and fields. The essays are rigorous, engaging, creative, and crisply (and sometimes also lyrically) written, appealing to the full complement of the human sensorium. The interdisciplinary approach—especially its conspicuous hospitality to theological contributions, which is apparently somewhat contested ground—is also welcome, although readers may find certain chapters more or less approachable depending on their level of background in the relevant discipline. That said, on the whole specialists working directly in the field of Pärt studies will welcome this collection as offering new, creative, and varied understandings of Pärt’s influences, interlocutors, and intentions; the generalist reader will find much that is both informative and even spiritually edifying. It will appeal to theologians, musicians, musicologists, phenomenologists, and historians, as well as both charm and surprise the appreciative but curious non-expert listener of Arvo Pärt who may know his work only through Spiegel im Spiegel or other such popularized compositions. Perhaps the greatest merit of this collection is not, however, just in how it nuances popular and critical reception and grounds Pärt’s music in time, body, and history—both of which are no small feats! —but also in how it opens as an invitation to both new and seasoned listeners to experience the music of Pärt, in all its richness, versatility, and specificity, anew.