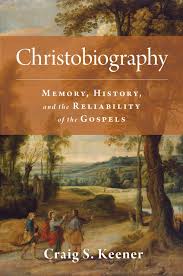 
Craig S. Keener, author of popular and scholarly commentaries, monographs, studies of contentious issues, and even an account of “impossible love” with his wife Medine Moussounga Keener, addresses the common genre of the four Gospels. He begins by asking how the genre of ancient biography can illumine the approach of the four evangelists, building on the work of Burridge and others: the ancient bios is the closest analogue to our Gospels. Though he is interested in both redaction and history, his main purpose is to show what emerges if we apply to the Gospels the same expectations that the ancients had of biographies. Key is the stress upon “living memory” as historical evidence, and attention to our own “default expectations” (15) regarding how the Gospels handle events. The subtitle here comes into play: “Are the canonical gospels historically reliable?” If we understand the constraints of the ancient biography, Keener contends that we should presume “a significant a priori degree of probability” (15) concerning the historicity of the Gospel. Thus he adopts a “median” position between skepticism and the wrong-headed assumption that the Gospels transmit unshaped material.

He makes clear that his approach is not novel, but comments that many who have put the Gospels alongside the ancient bioi in general terms have not always done the hard work of meticulously reading this body of literature, with all its variations. This he does admirably, presenting his findings and his stance as a helpful prolegomenon to further work. In his first section, Keener traces modern genre-studies of the Gospels, beginning with the nineteenth-century assumption (of some) that the Gospels are a sort of biography, moving to the dismissal of this genre in the early to mid-twentieth century by Bultmann and others, and finally approving the studies of Talbert, Berger, Burridge, and Stanton, which reinstated biography as a helpful heuristic category. He then dismisses alternatives: the Gospels are not sui generis (though as a sub-genre they have unique elements), ancient novels or romances, fables that signal their fictitious nature, dramatic poetry, nor merely religious propaganda. A major plank in his argument is that they depend upon “prior sources,” signaling their intent to present an accurate biography of their main character.

Keener then treats us to an engaging account of various types of ancient biography, Greco-Roman and Jewish. He traces a development from early biography that sat rather loosely to the facts, through the heyday of the genre (Philo, Josephus, Tacitus, Plutarch, Laertius, and others), and ending with the decline of the genre into hagiography. He suggests that the biography of the early empire is the best model to adopt in understanding the constraints of the genre for the Gospel writers. His further chapters of part one fill out this argument, comparing the Gospels with apt examples and considering the expectations ancients had of biographies, both by analyzing these, and by heeding their authors’ and critics’ descriptions.

In part two, Keener demonstrates the overlap between ancient biography and historiography, registers the ancients’ concern for bias, and lands on Luke-Acts as a specific case. He rounds out this second part by focusing upon the specific requirements of biographies written close to the time of the subject, citing the condemnation of Josephus concerning writers who wrote without any firsthand or close knowledge of the matter (245). Gospels depend on living memory, and would have been judged by such standards.

Part three tests “the range of deviation” among “elite” biographies by comparing especially lives of Otho (but also of Galba), in which varying degrees of “flexibility” are to be found, though not complete elasticity due to their use of sources. Josephus is then tested for his use of the Septuagint to demonstrate his degree of adaptation. Keener highlights differences in Philo, Josephus, and Plutarch regarding the literary techniques of expansion, abridgement, omission, transfer of material among persons, conflation, and the like. These observations are clinched by an appeal to the ancient handbooks of composition, which accept such practices. He concludes that audiences of the past understood and accepted such conventions, while they also valued the “essential story” and looked for veracity there.

Part four meets objections: the problem of miracles, and the Gospel of John. Keener’s purpose is not to make a plea for the possibility of miracles (as in a prior work), but to establish that Jesus was experienced as a wonder-worker, and that these stories that came largely from eyewitnesses. The presence of such events in the Gospels is no threat to classing them as biographies. As for John, Keener has already set it up as an example of flexible biography, and moves on to show not only the evangelist’s homiletic development of the material, but also his significant overlap with Mark—over one hundred points of agreement. John may be “maverick,” but is still “closer to biography than to a novel” (364).

Finally, part five stresses the major plank in Keener’s argument: that the Gospels were written within the living memory of their subjects. This memory, indeed, was much “keener” (the author will pardon the pun!) than our own faculties, since philosophical schools, teachers, and communities emphasized rote repetition and rehearsal. This is seen in the forms that they used, in anecdotes about the prodigious memory even of the illiterate, and in expressions such as the Jewish enjoinder to “chew the cud” when meditating. The author also points out that even in our day, memory is more powerful than we allow; in all this, Keener has recourse to memory studies concerning our era and the past. He concludes that oral tradition could be powerfully continuous with the living memory of those who knew Jesus, and that the Gospels frequently show a Jesus within his original context, and not simply as a remix for a second (or third) generation. A final chapter summarizes the findings of his book, appealing to scholars and students to read the Gospels according to their intent, acknowledging that they were written within living memory of Jesus, accepting the Gospels themselves as evidence for historical matters, and understanding that all of them fall within the range of variation accepted for biographies of their time.

Keener’s work has a broad appeal, since he situates himself in a middle space, offering a tertium quid to replace utter skepticism concerning the Gospels and history, and wooden understandings of verbal inspiration. His obvious respect for Scripture will commend this book to Orthodox readers in particular, as will his attention upon Jesus as the major figure: his scope is not restricted by the liberal-“fundamentalist” divide. Though his argument assumes the priority of Mark and the existence of a written Q, many of his points hold whether or not the scholarly consensus on these matters is accepted. Readers should applaud the author for a mature and humble self-disclosure of theological convictions, which nevertheless do not prejudge the evidence.

Even those who remain unconvinced of his foundation —this reviewer still considers the Gospels to be sui generis—will find much of value! Keener coins the term “Christobiography,” but I would like to have seen a more robust discussion of what difference it makes when a work aims to reveal not simply a Messiah, but God incarnate. Sadly, Keener puts the cosmic and theological John 1:1 alongside other introductions to the “biographee” (28)—a move that obscures the difference rather than illumining a similarity. Similarly, in speaking of John’s remarkable aim to give life (John 20:31), Keener merely opines that its “apparent purpose statement…is consistent with the purpose of some ancient biographies” (346). However, to note that the divine Subject bursts the constraints of this genre, and reformulates it, is not to render the careful work of Keener and its implications invalid. If the Gospels are not exactly “biographies,” close analogues remain helpful in contextualizing them.

This detailed piece is not for the faint of heart, but is not as voluminous as some of his other works, and will appeal, despite its close arguments, to the industrious non-specialist. The approach, with its modesty, humor, modern analogies, and self-disclosure, is engaging. Some may be annoyed, but others entertained, by the cute subtitles, which employ puns, alliteration, and other striking turns of phrase— “minimizing minimalism” (261), “more morals, not less lessons” (132), “the fabled Aesop” (49). This is a balanced and mature study, evincing a charitable attitude to those with other opinions, showing a concern for genre and history, providing paths for further research, and offering useful outcomes rather than simply antiquarian analysis. In the end, Keener establishes his own ethos with a charm that is frank and lacks any whiff of stuffiness, and so entices us to follow him into very deep waters. The depth of this book is demonstrated by the extensive bibliography and helpful indices: Keener has “chewed the cud” for us, and the five hundred pages of argument are merely a distillation of more detailed analysis that stands behind his final presentation.