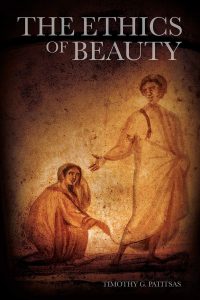 
Timothy Patitsas, who teaches ethics at Holy Cross Greek Orthodox School of Theology in Brookline, MA, has written a genuinely massive tome (748 pages). However, despite the book’s size, two factors make it eminently readable and accessible. For one thing, the book is designed in such a way that each chapter is in fact an interview between a relatively anonymous interlocutor and the author himself. While this does not mean that the author does not avail himself of formal academic prose, footnotes, etc., it does mean that there is a conversational tone throughout that alternates rather winsomely between formal argumentation and colloquial examples. One has the sense in reading it that one is sitting in a seminar run by a deeply engaging teacher. Two, for all the territory that the book covers (a brief list of topics sustained at length includes trauma recovery, contemporary psychoanalysis, liturgy, marriage, gender identity, war, urban planning, social justice/activism, and lay/monastic vocations), both the main topics and the many excurses center on one methodological and substantive assertion.

That assertion, in a nutshell, concerns the classic triad of transcendentals (common especially in Platonic and Neo-Platonic currents) of Truth, Goodness, and Beauty. Patitsas’ core contention is that a properly Orthodox conception of ethics (as increasingly attested by classical and emerging voices in other disciplines) should not conceive of its task as beginning with truth (rationalism) or goodness (moralism), but with beauty. His “Beauty-first” methodology, as he continually frames it, describes not only patristic understandings of soul healing but also gives a framework for metabolizing the best insights from trauma recovery, urban planning, ritual studies, and so on. The method of the book, then, is less a matter of sustained argumentation and more a wide-ranging application of “Beauty-first” methodology to topics of longstanding concern to ethicists. These topics, in Patitsas’ hands, have less to do with punctiliar moments of moral decision-making (“ethics” in a restrictive sense) and more to do with more classical questions as to the shape of the good life and the nature of the soul healing needed to achieve it.

Indeed, the book intriguingly begins and ends with consideration of trauma recovery. While this might seem an odd choice, Patitas convincingly demonstrates (with the help of both classical literature such as the Illiad and contemporary thinkers such as Jonathan Shay) that trauma recovery is a helpful stand-in for soul healing in general, because it showcases vividly how simple appeals to rationality (e.g. “there is nothing to be afraid of, the war is over”) or goodness (“here is how you ought to act now”) tend to fail to bring traumatized people back from despair. Instead, introducing both a new vision of the beautiful and patterns of ritualized action/reception by which that vision can be instantiated and embodied (e.g. liturgy) provides the sort of re-orientation within which healing can begin to take place.

Theologically, throughout the book Patitsas correlates the Beauty –> Goodness –> Truth progression with other key triads familiar to Orthodox theology: chastity –> empathy –> humility, for instance. Some of the most theologically compelling sections come when Patitsas links beauty primarily to eros for Christ in such a way that this desiring love becomes the ground for agape, and when he goes further to name beauty in theophanic terms.

The way of Orthodoxy, the way of “right Glory,” is to begin by giving glory to God’s Theophany (the beautiful) and then to practice the Good glimpsed within that Theophany. Through this eros which unfolds into agape, we participate in the True, and thus we become true…Outside the Orthodox Church, Ethics is done backwards, moving from the True to the Good, and it is often done only part-way, never managing or bothering to reach the Beautiful. This is all right for certain purposes, especially in a secular society where reason is the only thing we all recognize in common. But when this truth-first approach occupies all of Ethics, it renders Ethics largely powerless to move and thus heal the soul. That which does not stir the soul in dynamic movement towards its telos cannot heal the soul. (p. 192).

Intriguingly, when discussing the various ways in which this Beauty is (or fails to be) instantiated in the structures that order our lives, the phenomena of most interest to many scholars who work at the intersection of ethics and aesthetics (fine arts, popular culture, music, etc.) receive less attention in Ethics of Beauty than do such ordering structures as architecture, urban landscapes, therapeutic engagements, and covenantal relationships (particularly marriage).

In examining these structures, Patitsas has continual recourse to the theological notion of “dual anointing,” whereby initiation into the triumphal aspects of Christian life carries with it the cross of suffering alongside Christ (thus, the dual anointing whereby the king becomes the sacrifice, not only in Christ, but in the shape of the Christian life itself). This is a crucial point, because it demonstrates the author’s awareness of the longstanding concern that prioritizing Beauty in theology/moral life might inadvertently lead either to naïve emotionalism or to captivity to worldly conceptions of beauty – say, an aesthetic sensibility privileging the nubile or ecstatic over ascesis and the cross. By understanding both the phenomenon and the liturgical instantiation of the Theophany of Beauty in “dual anointing” terms, Patitsas shows how Orthodox theology chastens but ultimately expands our vision of the beautiful in strikingly staurocentric ways (a move which, to this reviewer, redeems an otherwise unnecessarily baroque chapter on marriage and gender roles).

A major strength of the book is the author’s dexterity in moving from these specifically theological themes to the aforementioned governing structures of contemporary experience. However, I do have a few methodological qualms on this front.

For one, Patitsas’ depth of engagement with quality interlocutors in considering a given area of inquiry is uneven. For instance, in his considerations of architecture and urban planning, he offers sensitive and nuanced readings of key figures in the field. However, in a lengthy critique of contemporary psychoanalysis, he eschews deep engagement with representative current texts in the field (on both the “secular” and pastoral care sides) and spends an inordinate amount of time on Freud, whose contemporary (as opposed to historical) influence on psychoanalysis is minimal. Patitsas the champion of, say, Platonic notions of architecture and abundance-driven visions of urban planning is a nuanced reader of the fields; Patitsas the controversialist does not afford the same honors in places where he is inclined to disagree. This unevenness makes his more polemical sections seem less careful and more dogmatic (in the negative sense).

Second, the book’s continued theological push for the sequencing of Beauty –> Goodness –> Truth would be strengthened by a more extended consideration of how sequentialization does not imply disaggregation. Both in Plato and in the patristic thinkers most central to Patitsas’ theology (e.g. Maximus), arguments about prioritization or sequencing of the classic transcendentals cannot be taken to mean that they somehow exist apart from each other (quite the opposite is implied). Indeed, Patitsas’ book has several engaging sections in which he demonstrates that, in the patristic mind, the unity of God implies (in somewhat perichoretic fashion) that where the one transcendental is, there the others already inhere. But if, to paraphrase Augustine, the presence of the transcendentals ad extra is indivisible, then Patitsas’ repeated contrasts between “Beauty-first” approaches and other approaches that he accuses of bad sequencing run the risk of drawing such stark dichotomies that the three become disaggregated somehow. Surely sequence among the transcendentals must remain somewhat fluid, both to account for the messiness of life and to account for the salvific unity of God. Again, I don’t think that Patitsas would disagree with that perichoretic fluidity as a theological principle, but it does mean that repeated invocation of “Beauty-first” would benefit from more extended deference to it. Otherwise, the ethical schema becomes a sort of Procrustean method by which both life and God are shrunk to fit the concepts rather than the concepts elucidating the workings of God in the healed soul.

These concerns aside, The Ethics of Beauty reads as the work of an erudite and morally transparent scholar who seeks to call the discipline of ethics into the primary tasks of soul healing, wonder, and cross-shaped engagement with the world, and also to show how specifically Orthodox understandings of these tasks align in intriguing ways with both mainstream and maverick voices throughout the arts and sciences. It will be of interest both to theologians and ethicists but also those who wish to engage the specifically theological dimensions of the physical, relational, and spiritual shapes that give meaning and direction to our lives.