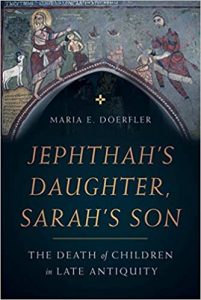 One of the liveliest areas of current discussion amongst scholars of ancient Christianity is the diverse nature of theological discourse embedded in liturgy. Theologians may not find this idea surprising. What is liturgy, after all, if not the ritually enacted expression of doctrine? However, scholars of religion and historians of Christianity might see matters differently. Liturgy, too, has a social history. Its presentation, content, and enactment respond to the time and place where it is performed, and to the social expectations and cultural needs of its context. Hence liturgical texts – sermons, hymns, and prayers – can sometimes provide windows into what scholars refer to as “lived religion”: that reality of religious practice that people enact in their daily lives, which may or may not align easily with doctrine or institutional mandates.

A clear case is that of Christian responses to death. Late antiquity evidenced deep continuity with ancient Greek and Roman traditions regarding death and dying: whether in the socially acceptable (and hence socially veiled) sentiments of grief displayed in funerary arts, or in inherited forms of lamentation, or in writings deeply inflected with philosophical sentiments of detachment and resignation. To these longstanding forms of ancient grieving, Christian leaders added new tones: Christians should not grieve death, as they now lived in the comforting hope of resurrection. Ancient Christian writings on the topic of bereavement can, in fact, be cringe-worthy. Grief was not only discouraged, but denied. The “true Christian” should not, could not, acknowledge death with anything other than joyous expectation of the life to come. Perhaps these are sentiments of profound theological meaning. Yet, for the parent, spouse, sibling, child, beloved friend: how could there not be grief? And what theological content might that reality of grief reveal, alongside and in tandem with acknowledged faith in a resurrected Lord and the promise of a resurrected life?

Maria Doerfler’s recent book, Jephthah’s Daughter, Sarah’s Son: The Death of Children in Late Antiquity, is a shining example of how scholarship can utilize liturgy towards new social insights. This is a delicate project: with the death of children, Doerfler takes up grief at its harshest manifestation. The book is exemplary as much for its tone as its courage. Direct, lucid, yet nuanced, Doerfler manages to keep real people, real lives, and real deaths in view even as her methodology might seem oblique. Her focus is the liturgical hymns, sermons, and prayers that present imaginatively expanded versions of biblical stories involving deaths of children. As she states in her introduction, there is a surprising disjuncture between what ancient theologians admonished about deaths, and what biblical stories – especially in emotionally expanded narrative forms – expressed. The message of consolation Christian leaders preached, time and again, was this: “The death of children was a boon to both the deceased and to their families – an occasion for parental delight rather than grief” (p. 12). Yet, the telling of biblical stories in liturgical forms (through hymns, narrative homilies, or recalled in prayers or visual arts) showed a different response.

Against this backdrop [of prescribed consolation] stand the voices, provocative in their incongruity, of biblical characters’ unrestrained grief at the loss of their children: their lamentations, challenges to God, and efforts to bargain with the divine. They reflect counternarratives, less well attested among the sources traditionally considered by historical theologians, but nevertheless no less vital for their communities. (12)

In effect, this book demonstrates that biblical story-telling in the context of communal worship provided ancient Christians a significant religious response to their own experience of the death of children. Biblical stories offered a variety of “scripts” by which to face such death, whether of infants or older children, whether by illness or tragedy natural, personal, or political. Moreover, through the forms of their telling, these stories named and acknowledged the entire emotional spectrum of grief that such deaths might elicit. If social decorum and theological commitments denied the possibility of grief, biblical stories affirmed it. In the context of liturgical worship – ritually scripted, collectively performed, and theologically resolved in eucharistic culmination – such stories offered profound resources for confronting death as a reality of human life.

The book begins with scrupulous treatment of infant mortality in the Roman Empire, considering the deaths both of children and women in childbirth. Doerfler discusses epigraphical and literary attestations of bereavement. Citing mortality data and cemetery remains, she moves on to practices surrounding the death of children: efforts to protect children through amulets, spells and prayers; burial practices; funereal customs; and the behaviors by which grief was articulated, acknowledged, shared, and negotiated in late Roman society. Recent scholarship in classics, religious studies, archaeology, and history has handled this evidence at length. Doerfler brings it together efficiently and concisely, and then turns to her own contribution. This is the insightful move to take sermons and hymns that retold biblical stories involving the deaths of children and their grieving parents, and to present these as polyvalent windows into the lives of real late antique families.

Doerfler focuses on texts performed in public liturgy. As such, they offer vivid examples of how Bible was taught and learned in ancient Christian communities. Moreover, they are examples of how biblical exegesis was conducted for the broader community, and not only by and for learned scholars or theologians. Furthermore – and most importantly for this book – these were publicly performed texts that offered models, typologies, and scripts by which parents, families, friends, and local communities might navigate their own tragic losses. Doerfler chooses a powerful roster of examples: Eve and Adam’s grief for the death of Abel and demise of Cain (Genesis 4); Sarah’s grief when she believes Abraham has sacrificed Isaac (Genesis 22); the sorrow of Jephthah for his daughter (Judges 11) and the Maccabean Mother for her sons (2 Maccabees 7); Job’s loss of his children (Job 1); the deaths of the Holy Innocents (Matthew 2). In each case, notably, the biblical text either presents parental grief with laconic restraint or omits it altogether. By contrast, liturgically re-told versions of these stories do not hesitate to lay bare the brutal depths of horror such grief might tread.

Each of these cases Doerfler mines for multiple purposes. How were the deaths of infants and children understood by ancient Christians, with what notions of final judgment, of sin or redemption, of innocence or human guilt? How were parents to cope with such loss, with what sources of solace, means of comprehension, or therapies for trauma? How was God to be perceived, or theodicy confronted? In her incisive treatment, these texts bring to life late ancient communities in the sorrows of their mundane lives, opening new vistas on the processes, practices, performances, and tools by which people dealt with life and loss in its most intimate form: the loss of children. By weaving together the realia of surviving material evidence with the collective ritual habits practiced in and through local liturgical life, Doerfler provides an entry into social and personal reality that scholarship rarely affords. She does so with meticulous treatment of her diverse forms of evidence, never sentimentalizing nor sensationalizing (two temptations constantly raised by the rhetorical conventions of the texts themselves). The presentation is riveting, thought-provoking in every best sense. This is a book of maturity and wisdom: profoundly insightful, rigorously learned, deeply humane. It is a model of the historian’s craft, infused with the distinctive perspectives offered by religious studies as an academic discipline.

The book demonstrates unusually broad mastery of the ancient Christian world. Professor Doerfler is as much at home, and as strikingly original, working with Latin, Greek, Syriac or Coptic, whether with major authors such as Augustine or Jerome, the Cappadocians or John Chrysostom, Ephrem the Syrian or Jacob of Sarug, or lesser known, anonymous texts. The range of command here is exceptional, and the more so because of what she does with this material. Rather than treat them as literary texts evocative of their times and contexts, Dr. Doerfler embeds these sources in the densely textured social and political world within which they were produced. She surveys a wide variety of literary genres: hagiography, historiography, letters, sermons, hymns, funeral orations, legal codes, biblical commentaries. And she treats them with an equal array of non-literary evidence: inscriptions, archaeological data, papyri, documentary evidence, manuscript transmission. From her meticulously researched, judiciously navigated sources, she opens vivid panoramas of Christian life in late antiquity. Above all, she opens the experience of trauma at the loss of a child, the social and cultural resources available for solace, and the way that sacred narratives could serve as therapeutic models for managing unimaginable grief.

Orthodox Christians pride themselves on their ubiquitous engagement with biblical stories in liturgy, ecclesiastical calendars, and sacred arts. In Jephthah’s Daughter, Sarah’s Son, Maria Doerfler demonstrates that such engagement has allowed more forms of theological reflection and instruction than we have yet recognized. In the process, she further suggests how ordinary people, themselves, might have been present in that work. As a social and cultural historian coming from religious studies rather than theology as her home discipline, Doerfler makes a remarkable contribution with this book. At the same time, there is further work to be done: (1) on liturgy as ritual and performance, and how those elements contribute to the impact, meaning, and authority of these sermons, hymns, and prayers; (2) on theological ramifications and exploration of the texts she considers, particularly insofar as they represent an often sharp contrast to familiar patristic teachings on death and grief; and finally, (3) to consider how to apply these historical insights to our living context.