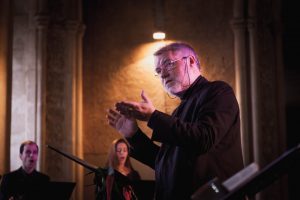 Ivan Moody, Nova University of Lisbon (Lisbon, Portugal)
Fr Ivan Moody is an internationally renowned composer and conductor. His largest works to date are Passion and Resurrection (1992), the Akáthistos Hymn (1998), and Qohelet (2013). He has also directed many choirs all over Europe and the Americas. He has lectured and published widely, publishing Modernism and Orthodox Spirituality in Contemporary Music in 2014. He is a researcher at CESEM-Universidade Nova, Lisbon, Chairman of the International Society for Orthodox Church Music, and a founding member of the Music Panel of the European Academy of Religion. He is a protopresbyter of the Ecumenical Patriarchate of Constantinople in the Diocese of Spain and Portugal.

The sacred music of the Orthodox Church is not monolithic, but multifarious. The great corpuses of Byzantine chant, the various repertoires of Russian chant, Serbian, Bulgarian, Romanian, Georgian, and Arab traditions are all examples of collections of music for ritual worship that have developed over centuries and established a firm traditional basis for ecclesiastical chanting. As Orthodoxy has spread throughout the world, these repertoires have undergone change, in response to the linguistic and cultural challenges of new environments.

The Church Music Group of IOTA aims to be a place for open discussion of Orthodox church music of all kinds, avoiding narrowly phyletistic narratives and aiming to attract leading practitioners, composers, and scholars of church music from all over the world so that many aspects, including the historical, geographical, aesthetic, creative, and practical, of this extraordinary living legacy may be considered in an atmosphere of mutual learning and understanding.

To that end, aspects we would invite potential speakers to consider include, but are certainly not limited to the following:

We encourage submission of individual papers and panel sessions on any of the themes above, as well as free papers.

Another aspect of this group is the possibility of interaction with other institutions, such as the International Society for Orthodox Church Music (Finland) or the Saint John of Damascus Society (USA). Members of these Societies could bring group presentations to IOTA, and then hold separate meetings in parallel, if necessary and desirable: in any event, interaction with like-minded organizations is deemed essential to avoid duplication of effort and to encourage communication.