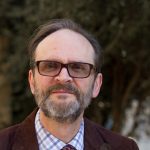 Peter Bouteneff is Professor of Systematic Theology at St. Vladimir’s Orthodox Theological Seminary, and Founding Director of the Institute of Sacred Arts. He has authored and/or edited 20 books and scores of published essays on theological themes as well as on sacred arts (notably on the Estonian composer Arvo Pärt). From 2007-2016 he was Vice President of the International Association of Orthodox Dogmatic Theologians.

IOTA’s main purpose is not simply to produce more essays for potential publication. It is to bring together Orthodox scholars from parts of the world that have been separated by much more than geography. The atheist siege of so many historically Orthodox lands effected a massive demographic shift in the flourishing of the Church’s life and theology. We are only beginning to appreciate its significance, and to recover from it. Any of us who have participated in international Orthodox theological gatherings outside our own region have likely been struck both by what we all have in common as well as what we experience very differently. Orthodox theology has always been a unity-in-diversity. But the diversity is perhaps especially striking and challenging. Let us here consider both theological and political priorities, giving for each a very broad presentation.

Theologians from theological faculties in Eastern Europe are liable to experience the work of their colleagues in the United States especially, and Western Europe to a different extent, as “Westernized,” and often as irreverent. Orthodox theology in the “diaspora” addresses questions that are barely raised (or seen as less urgent) in the East. Orthodox theologians in Western Europe and especially in the United States are more likely to be influenced by critical theory, and as such are more open to questioning, e.g., the historical reality of events and persons depicted in scriptural and hagiographic writings. Theologians in the West will often separate history from theology, and at the same time prioritize the concrete implications of theology. What we mean is best understood by reversing the perspective: the theology emerging from Russia, Serbia, Romania, and to an extent also Greece, seems to Westerners abstract and scholastic in its character, and also hesitant to critically analyze sacred texts.

There is obviously also a variety of approaches within both of these geographic realities: in the West, for example, one contemporary theological trend continues to hold to priorities of the émigré theologians of the twentieth century, and to questions raised by continental philosophy, such as issues surrounding radical freedom as well as the constellation of concerns emanating from the German Idealists. Another trend sees such questions as no longer relevant.

As to political priorities, we can note at least that the kinds of ethical and moral issues that seem to have the most urgency for so many Orthodox—abortion, homosexuality, and war (especially specific wars)—play out very differently in the United States, Western Europe, Eastern Europe, and the Middle East. As Westerners, we note that the “left-right” spectrum is experienced very differently within different regions. The nature of party politics, the effects of secularism, the extent to which we feel beholden to our respective governments, all of these influence our respective theological and socio-political output. The various ecclesiastical responses worldwide to conflicts in the Middle East are especially telling in this respect. Moreover, in the West, many Orthodox take up issues of social justice together with other believers and even with secular humanists, in accordance with Gospel values. Such issues include respect for the human person, abolition of torture and the death penalty, defense of the human family, etc. They engage in such collaborative efforts on the principle that Orthodox anthropology is not a sectarian ideology but a dogmatic principle that has far-reaching implications in society.

Our theologies as Orthodox Christians are united by great many features, yet they remain widely diverse as to style and priorities. The Internet has made it easier to be aware of others’ theological styles and priorities. Yet we remain unlikely to encounter and engage with theology emanating from vastly different contexts than our own. So this, to us, is the main significance of IOTA: it is a step towards familiarizing ourselves and each other with the diversity of Orthodox theological approaches, priorities, and languages. We can only be enriched by this experience, especially if IOTA becomes a regular event.

Yet the moment one applies a “systematic” method to the exploration of church teachings—identifying ecclesiology, Mariology, pneumatology, eschatology, etc.—the more one realizes that it is impossible to isolate them from each other. They are all interdependent, and all are founded ultimately on the person of Christ. Just as St. Gregory the Theologian famously exclaimed about the Trinity—“No sooner do I conceive of the One than I am illumined by the splendor of the Three; no sooner do I distinguish Them than I am carried back to the One”[2]—so it is with dogmatic or systematic theology. You separate your work into separate disciplines only owing to the limitations of human logic, and if you’re doing it right you immediately come back to Christ—and the moment you do, you must return to all that entails from the person of Christ to everything else: the Church, the human person, death, Mary, etc.

Thus, “dogmatic theology” is an all-encompassing discipline. The choice for our group, for the Inaugural Conference of our international association, is either to select one of the topics for our focused session, or to discuss issues and methodologies that shed light on the entire discipline. We propose to do some of each. We are co-planning two joint sessions: one with the Religion and Science Group on “Creation and the Ecological Problem,” and one with the Philosophy of Religion Group on “The Doctrine of the Trinity.” And for our themed session, we are looking to explore questions relevant to multiple sub-disciplines, focusing on questions of method.