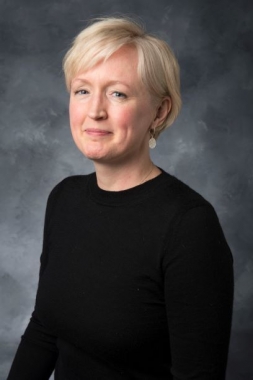 Lori Branch is associate professor of Restoration and 18th-Century English Literature at the University of Iowa. Her first book, Rituals of Spontaneity: Sentiment and Secularism from Free Prayer to Wordsworth, was named 2007 Book of the Year by the Conference on Christianity and Literature. She has published widely on literature and religion ranging from the fourth-century Sayings of the Desert Fathers to contemporary Gothic fiction, and frequently lectures on postsecular studies in Europe, the US, and China. With Mark Knight she has also co-directed two NEH Summer Seminars for faculty on “Religion, Secularism, and the Novel.” She is currently at work on a book project titled Postsecular Reason, and she edits the monograph series “Literature, Religion, and Postsecular Studies” for Ohio State University Press.

The Orthodoxy and Literature Group garners its sense of mission from the inextricably literary nature of Christian faith and worship. The potent evangelical texts of our tradition—Scripture, liturgy, apostolic writings, and texts from the patristic era to the present—take a variety of literary forms: parables, lyric and dramatic poems, hymns, canons, historical chronicles, hagiographical narratives, prophetic and apocalyptic dream-texts, and novels. This rich variety reflects our multifaceted human creativity and love of beauty, elements of our imago Dei, and these texts bear meaning and power in and because of their literary form.

The ways that the beautiful poetry of the Paschal Canon or a moving vignette from a saint’s life reach the human heart may seem so obvious as to pass unnoticed. However, the potentially thornier questions of the relation of Orthodox Christian faith to literature were raised by Christians as early as the fourth century, asking whether the Greek classics made appropriate reading for Christian youth, a concern addressed by St. Basil the Great in his “Address to Young Men on the Right Use of Greek Literature.” For St. Basil, not only are poetry and fiction potential bearers of truth, goodness, and beauty, but even pagan literature may be so. Christians have the freedom and even responsibility to read widely, Basil advises, “altogether after the manner of bees” in search of nectar,} taking away “whatever benefits our souls and is allied to the truth.” Thus, drawing on their rich Byzantine educations, St. Basil’s friend St. Gregory Nazianzus produced a vibrant Christian literature under Julian the Apostate, and in The Life of Moses St. Gregory of Nyssa crafted a lovely emblem of the joy of eternal progress in relationship with God. Likewise St. Ephrem the Syrian, St. Romanos the Melodist, St. Symeon the New Theologian, and acclaimed Orthodox writers of the last two centuries—Nikolai Gogol, Fyodor Dostoevsky, Alexandros Papadiamandis, Eugene Ionesco, Mircea Eliade—have produced literature that explores creation and the human–divine relationship. The Russian Orthodox literary theorist Mikhail Bakhtin saw liturgy and literature as embodying a profound dialogism and heteroglossia, engaged in the search for and the making of meaning. Many confessors of the communist period, including Fr. Nicolae Steinhardt and Fr. Roman Braga, testified to the crucial role literature—especially in the context of dialogue with others—played in bringing them to faith in Christ and sustaining and deepening that faith. Orthodox spiritual guides from Alexander Schmemann to Seraphim Rose have testified to the power of literature to cultivate a compassionate sensibility in which the gospel can germinate and flourish. The breadth and depth of our tradition testify that from an Orthodox mindset, literature can provide verdant grounds for revelation and repentance, because it speaks both to our freedom and to our capacity to love the beautiful and to seek goodness and truth.

Recognizing this, the Orthodoxy and Literature Group seeks to serve the Church by enlivening its reading, discussion, and understanding of literary art as a beneficial part of the spiritual life. We seek to bring together scholars of literature and theology to host mutually enlightening interdisciplinary conversations that

The Orthodoxy and Literature Group believes that the making of meaning through poetry, story, and the ongoing conversations of interpretive communities is a vital means of the spiritual renewal and practice of the arts of conciliarity which are at the core of IOTA’s mission.