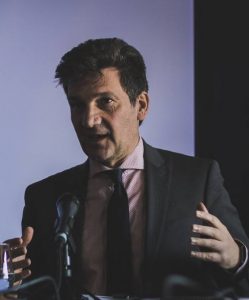 Vladimir Cvetković is a research fellow of the Institute for Philosophy and Social Theory of the University of Belgrade (Serbia). He obtained his BA and a PhD in Philosophy from the University of Belgrade in 1997 and 2007 respectively, and a MA by thesis in Theology from Durham University in 2002. He has held research and teaching positions at the universities of Princeton (USA), Aarhus (Denmark), St Andrews (Scotland, UK), Oslo (Norway), and Niš (Serbia). His research interests include Patristics, Ancient and Byzantine Philosophy, and Modern Orthodox Theology.

Ivan Christov is Full Professor at Faculty of Theology, Sofia University. He obtained his PhD on Hexaemeron in the Greek Patristic Tradition at the University of St. Petersburg (Russia) and Habilitation on Byzantine Theology in the 14th Century at Sofia University. He also took part in bilingual Greek and Old Slavonic critical editions of the Fathers: of the Corpus Dionysiacum, the First Oration against the Arians by St. Athanasius (forthcoming), Oration on All Saints Day by St. Philotheos Kokkinos (editio princeps) and published a Greek-Old Church Slavonic Dictionary. Developing electronic research tools is another field of his interests such as Thesaurus Linguae Maximi Confessoris and Medieval Greek-Old Bulgarian Dictionary. He takes part in the Orthodox and Catholic Vienna Patristic Colloquies and is currently engaged in the RESILIENCE project on the design of European infrastructure for Religious Studies, and in the Analytical Trends in Orthodox Theology sub-project at the University of Oxford.

The field of patristics has had a renaissance in the past century both in Orthodox and non-Orthodox scholarship. Some non-Orthodox scholars maintain that the term “patristics,” which originally referred to the textual, historical, and theological study of the Church Fathers, is somewhat narrow and needs to be replaced with wider descriptors, such as “early Christian studies,” but others still find the term useful. As a mark of the term’s enduring value, consider the fact that there are two major professional organizations which continue to include “patristics” in their name: International Association of Patristic Studies and North American Patristics Society. The term “patristics” has proven to be fairly resistant to the revisionist takeovers because it captures a sense that even today the ancient Christian sources have important things to say about God, Christ, salvation, and the world’s relationship to its creator. Overall, the revival of patristics in the twentieth century had much to do with the potential of the discipline to revitalize contemporary theological thinking.

In Orthodox scholarship, this revitalization program commonly goes under the name of a “return to the Church Fathers” or the neopatristic synthesis, charted by Georges Florovsky and his numerous followers. For Florovsky, neopatristics involved a hermeneutical procedure called “the acquisition of patristic mind” and, more importantly, the emancipation of Orthodox theology from its western influences. The program was developed in the interwar period, in the circumstances when global Orthodoxy and its theological institutions were in a state of a profound crisis. The “return to the Church Fathers” had great appeal because of its ability to function as a catalyst of Orthodox identity, especially when conjoined to the condemnation of the “western captivity of Orthodox theology.” In the second half of the twentieth century, neopatristic theology grew from strength to strength and became the dominant paradigm of Orthodox theology, inspiring a whole generation of Orthodox scholars—both converts and cradle Orthodox—to study the Church Fathers.

Over the last twenty-five years, Orthodox scholars have considerably refined and expanded this paradigm, as well as have begun to explore some alternatives. The refinement had to do, for example, with the methodological sophistication that was brought to the patristic sources by using a variety of critical methods, including historical contextualization. This in turn led to a growing realization that consensus patrum (“patristic consensus”) rarely amounts to the unanimity of early Christian authors and is often a matter of concrete conciliar decisions that, as far as their historical circumstances were concerned, have been highly contentious. The expansion of the dominant neopatristic paradigm had to do, for example, with an increased awareness that Greek and Latin Christian writers of late antiquity do not exhaust the richness of patristic thought and that the works in other languages, including Syriac, Coptic, Georgian, Armenian, and Arabic were also worthy of investigation. The alternatives were offered by those who insisted that dogmatic theology could not be reduced to the exegesis of patristic texts, no matter how valuable such an exercise might be; that there are burning contemporary questions for which the patristic sources may at best provide some general guidelines, but no obvious answers. There is a tendency within this camp to historicize patristic theological claims, especially if those claims clash with the prevailing contemporary views.

First, it is an opportunity to rediscover patristic insights without the apologetic requirement of straitjacketing these insights into artificial unanimity. As an example of such a rediscovery, a thematic session at the Inaugural Conference will be dedicated to the Eastern patristic accounts of the experiential apprehension of God or spiritual perception. While these accounts have important implications for theological anthropology and religious epistemology, they do not yield a consensus view on a coherent doctrine of the spiritual senses. Such a doctrine remains the task of philosophers and theologians.

Second, it is an opportunity to explore the neglected riches of traditions that have developed side by side with that of the Greek and Latin Church Fathers. To explore this opportunity, our group has included the relevant topic into the Call for Papers for the 2019 Inaugural Conference.

Third, while some earlier versions of the neopatristic paradigm tended to stifle the interest of Orthodox scholars in contemporary methods of biblical exegesis and philosophical-theological hermeneutics, we believe that the creative engagement and fusion of both ancient and contemporary approaches to scripture is a field white unto harvest. In this regard, our group welcomes the initiative of the Biblical Studies Group to offer a Call for Papers that deals with paradigms in biblical studies, including both ancient and contemporary, especially, historical-critical exegetical methods.

Fourth, since patristic theology is a special case of historical theology, the work of our group offers an opportunity to increase the “historical awareness” of such typically less historically engaged fields as dogmatic theology and philosophy of religion. In turn, the analytic tools of dogmatic theology and philosophy of religion may help those engaged in the study of patristic sources to uncover the riches that have been hidden from a less philosophically trained eye.

Finally, the field of patristics could be creatively interwoven with the work of most other groups in IOTA, including Byzantine Orthodoxy, Christianity in the Middle East, Religion and Science, Ecumenical Dialogue, Liturgical Studies, Political Theology, Orthodoxy and the Arts, and so on. We believe that such cross-fertilization will benefit all sides and could return rich dividends in the years to come. We hope that such a perichoresis or intermingling of different domains of the Orthodox Republic of Letters with patristics could become inspirational for the collaboration of other IOTA groups.

The study of patristics keeps the Church and its theologians firmly anchored in tradition. When such a study is undertaken skillfully and faithfully, it holds a potential of freeing Orthodox theology from the distortions of narrow traditionalism and the temptations of superficial revisionism.