David Bradshaw is a Professor of Philosophy at the University of Kentucky in Lexington, Kentucky (USA). His work focuses on the different ways that the eastern and western Christian traditions incorporated ideas from ancient Greek philosophy.  He is the author of Aristotle East and West: Metaphysics and the Division of Christendom (Cambridge UP, 2004) and of numerous articles on ancient, medieval, and patristic philosophy. 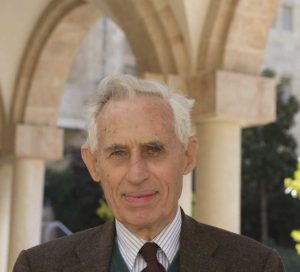 Richard Swinburne is a Fellow of the British Academy. He was Professor of the Philosophy of Religion at the University of Oxford from 1985 until 2002. He is best known for his trilogy on the philosophy of theism (The Coherence of Theism, The Existence of God, and Faith and Reason), second editions of all of which have been published recently. The central book of this trilogy, The Existence of God, claims that the traditional arguments of natural theology can be rephrased as cogent cumulative probabilistic arguments from the most general features of the observable world to the existence of God. He has summarized these arguments in a short “popular” book, Is There a God?. He is also the author of a several books on the meaning and justification of central Christian doctrines (summarized together in another short “popular” book Was Jesus God?); and is well known for his defense of substance dualism, the view (developed philosophically in a recent book Mind, Brain, and Free Will) that each of us consists of two parts, a body and a soul; and he is currently writing a short “popular” book on this topic as well. He has written at various lengths on many other major philosophical topics.

There have been two rather different traditions of philosophy, as practiced in the western world in the past century. What is known as “continental philosophy,” practiced in France and (at least until very recently) in most of the countries of continental Europe, derives from the writings of such post-Kantian philosophers as Kierkegaard, Nietzsche, and Heidegger. Though there are many important differences between different continental philosophers, what is common to many of them is that they seek to describe human phenomenology and the possibilities for human choice in a post-Enlightenment world largely empty of intrinsic meaning. Yet, educated in that tradition, Russian Orthodox philosophy of the late nineteenth and twentieth centuries and in particular Solovyov, Bulgakov and Berdyaev, as well as some more recent French philosophy and in particular Ricoeur and Marion, has sought to redirect it in such a way as to recover Christian doctrines.

The other tradition of philosophy is that practiced in English-speaking countries and now more widely throughout the world, somewhat misleadingly called “analytic philosophy.” It is an examination of the nature of reality—the constituents of the physical and mental worlds and how they interact (metaphysics)—and the extent to which humans can know, or at least have justified beliefs, about these matters (epistemology). It is a discipline very sensitive to the latest pronouncements of science, and seeks to establish its conclusions by rigorous argument. Although classical philosophers are sometimes (but not always) mentioned in philosophical writings, the emphasis is on the true solutions to philosophical problems rather than any attempt to describe their history. “Philosophy of Religion” in this analytic tradition is therefore an examination of the meaning and justification of religious claims; in theory these could be the claims of any religion, but both because most English-speaking philosophers are more familiar with Christianity than with other religions, and because the Christian religion makes very definite creedal assertions in a way that most other religions (with the possible exception of Islam) do not, it has been concerned so far primarily with the claims of the Christian religion. Hence it is concerned with: to what extent can human words be used to say anything about the attributes of God; what it is for God to be omnipotent, omniscient, perfectly good, necessary, and so on; arguments for the existence of God, and arguments against the existence of God (especially the argument from the occurrence of suffering), the relation of Christian doctrine to scientific claims; the nature of human beings; and the meaning and justification of particular Christian doctrines (to the extent to which there are a priori arguments which do not rely extensively on historical claims). In the 1950s and 1960s, philosophy of religion was not thought to be a serious intellectual enterprise in philosophy departments. But since then, because of the “metaphysical turn” in analytic philosophy and because analytic philosophers of religion use the concepts and results of other areas of philosophy, there has been an enormous growth of books and articles, and undergraduate and graduate courses, on the philosophy of religion throughout philosophy departments in the English-speaking world. These courses are taught by and studied by teachers and students who may be either religious believers or atheists. But the books and articles written in analysis and support of Christian doctrines have raised the discussion of them to a new theological level, treating them as thoroughly as did Western Scholastic philosophers such as Thomas Aquinas and Duns Scotus, but doing so in the light of the latest results of modern science and with sensitivity to the questions which worry the modern world.

Almost all the areas in philosophy of religion examined by analytic philosophers are ones which are of profound concern to all Christians, not merely Orthodox Christians. We strongly believe that work done in this area in recent years by analytic philosophers of religion is vital for the intellectual defense of Christianity in the era of the “new atheism” of the western world. Orthodox Church leaders and believers are almost entirely ignorant of this work; and we do very much hope that IOTA can help to make this work much more widely known in the Orthodox world. We hope too that if Orthodox theologians begin to write with familiarity with this tradition, they will be able to introduce analytic philosophers whose limited knowledge of theology is based on Catholic or Protestant writings, to the work of the Greek fathers. For example, the views of the latter on the divine attributes, including God’s passibility and God’s relation to time, seem to us to be ones which western writers ought to take into account when describing Christian views on these topics.

Because of our concern with the rationality of the Christian faith, our group has organized a session at the 2019 Inaugural Conference on “Natural Theology in the Orthodox Tradition.” There will be papers on the history of natural theology (that is, arguments from the nature of the observable world to the existence of God), and its justification. We are also organizing a joint session with the Dogmatic Theology group on the doctrine of the Trinity, in which there will be papers on the history of this doctrine, its correct articulation, and its justification. We are also contributing to a session on the theology of Gregory Palamas, which has had such a great influence on modern Orthodox thought. Finally, we are organizing an open session for which we are inviting proposals of papers that connect with Orthodox thought on any topic in the philosophy of religion.