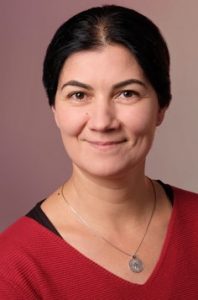 Anna Briskina-Müller studied Orthodox Theology in St. Petersburg (Russia) and Protestant Theology in Heidelberg (Germany) and made her Dr.theol. in Heidelberg (2005). From 2004-2014, she was Research Associate, lecturer (“wissenschaftliche Mitarbeiterin”) at the Protestant Faculty of Theology, University of Halle (Germany); from 2010-2014, Research Associate at the Theological Faculty of Humboldt-University of Berlin; from 2014-2018, Research Fellow in a project of her own funded by the German Research Foundation (DFG) on Paisius Velichkovsky at the Faculty of Theology, University of Halle; since 2018, she is Research Associate at Saxon Academy of Sciences. She is a member of the Society for Eastern Christianity Studies, German Historians Association and Consultant for the Foundation PRO ORIENTE, Vienna, Austria. The list of her publications includes works above all on Slavic Orthodoxy and monasticism, books reviews, interviews, lexicon articles and theological translations.

Vera Shevzov, Smith College (Northampton, Massachusetts, USA)
Vera Shevzov is Professor of Religion and Director of the Russian, East European and Eurasian Studies Program at Smith College in Northampton, Massachusetts. She is a graduate of Yale University (BA, 1982; Ph.D. 1994), where she completed her doctoral work under the mentorship of Jaroslav Pelikan, and St. Vladimir’s Seminary (M.Div. 1986), where she studied under the mentorship of Fr. John Meyendorff. As part of her graduate training, she also attended Leningrad Theological Academy. Her research focuses on Orthodox Christianity in modern and contemporary Russia. Her publications include Russian Orthodoxy on the Eve of Revolution (Oxford University Press), which was also published in Russian (Bulanin, 2010), and a recently co-edited volume of essays on The Mother of God in Modern, Revolutionary, and Post-Soviet Russian Culture. Supported at various stages by the Mellon Foundation, the National Council for Eurasian and East European Research, and the National Endowment for the Humanities, her research and publications have spanned a wide variety of topics in modern and contemporary Russian Orthodoxy, including history and memory; political theology; theology and the university; modern Orthodox perceptions of religion in America; Orthodox constructions of the West; miracles and modernity; and various aspects of Marian, iconic, and liturgical culture. Her current research project focuses on the topic of the Gulag and “ultimate questions” in post-Soviet Russian Orthodoxy, including issues related to human rights discourse.

The Slavic Orthodoxy Group of the International Orthodox Theological Association provides a forum for interdisciplinary discussion, and promotes scholarship and dialogue related to the theology, philosophy, material culture (including iconography and architecture), literature, spirituality, and lived experiences of Orthodox Christians from the Slavic regions of the Eurasian continent.

Today, traditionally Slavic regions with large Orthodox populations include Belarus, Bulgaria, Macedonia, Montenegro, Russia, Serbia, and Ukraine, with smaller numbers residing in Croatia, the Czech Republic, and Poland. Following waves of immigration in the twentieth and twenty-first centuries, Slavic Orthodox Christians have resided worldwide. Consequently, despite their shared Byzantine inheritance, and despite their common linguistic roots, “Slavic Orthodoxy” is highly diverse, comprised of distinct ecclesial “worlds” and cultures, each with its own formative political and ecclesiastical institutional history. Interrelations among the various Slavic Orthodox churches, as well as between Slavic Orthodox churches and the ancient Orthodox Patriarchates, especially that of Constantinople, have historically been complex and uneven. Similarly, Slavic Orthodox Christians have historically experienced a broad range of interactions with western European and traditionally Muslim cultures and political regimes. These interactions also contributed to the rich and intricate fabric of “Slavic Orthodoxy.” Despite the most recent Slavic Orthodox experiences under officially atheist communist states in the twentieth century, the majority of the world’s Orthodox Christians today reside in the traditionally Slavic countries of Belarus, Bulgaria, Macedonia, Montenegro, Russia, Serbia, and Ukraine.

Finally, despite Orthodoxy’s engagement with modernity in all of these regions, the depth of that engagement—philosophical, theological, and cultural—and its influence on the shaping of Orthodox thought and practice still remain little known, understood, and appreciated. In large part, the lack of in-depth knowledge of the history of lived Orthodoxy in these regions—as well as of their Orthodox institutional, cultural, intellectual histories—is the result of oppression under Ottoman or communist rule, the lack of access to, or destruction of, sources, and the still minimal translations of Orthodox writings into English or western European languages.

The goal of the Slavic Orthodoxy group, then, is to facilitate interdisciplinary research and theological thought in a mutual “intra-Slavic” key, while at the same remaining mindful of the diversity of historical memory that has informed Slavic Orthodox identities in both the past and present. Working in the spirit of unity in diversity, the group welcomes the participation of scholars from a broad range of disciplines who are working on any historical period or region within Slavic Orthodoxy.

The group seeks to promote collaboration and critical, collective self-reflection in the hopes of broadening the often constricted, highly specialized, and sometimes polemical frameworks in which contemporary scholars of Orthodoxy have tended to work. Its goals include tracing not only the ways in which the Byzantine liturgical, theological, and broader cultural inheritance was received and appropriated in these lands, but more importantly the subsequent “original” Slavic contributions to sustaining and enriching Orthodox Christianity as a living faith. Only through such cooperation and joint effort can the histories, vibrant theological heritage, and experiences of these cultures and peoples be coherently incorporated into the evolving, multifold narrative of the history of Eastern Orthodox Christianity.

As a first step, for the Inaugural Conference to be held in Iasi, Romania (January 9-12, 2019), the Slavic Orthodoxy Group invites scholars to submit paper proposals that consider any aspect of Orthodox thought and practice—including the institutional history of the churches—in the Slavic regions. In particular, we are seeking papers that consider the broad topic of “Orthodox Memory and the Slavic Orthodox Experiences of Oppression and Persecution.” While the interface between Orthodox culture and practice and imperial discourse is well known, Orthodox theological, philosophical, liturgical, iconographical, hymnographic, and grassroots devotional responses to experiences of violence is less so. We therefore would particularly welcome proposals that consider the various ways in which Slavic Orthodox Christians subsequently memorialized such periods of violence and repression, and the ways these forms of memorialization might have influenced, shaped, or articulated Orthodox understandings of such topics as the human person; radical evil and suffering; mercy, repentance, and forgiveness; sacrifice, martyrdom, and redemption; and the sacred features and roles of testimony, collective memory, and history. Papers may also address the processes which contribute to the formation of collective memory, various political theologies, or cases of manipulation of faith and doctrine for political ends, as well as various ways Orthodox Christians have responded to (and participated in) such politicizing processes.

The Slavic Orthodoxy Group will also be sponsoring a pre-arranged session on the topic of “The Slavic Orthodox World and Constantinople,” which will address ecclesiastical, political, theological, and liturgical issues—as well as lived issues related to lived Orthodoxy more broadly speaking—the historical and relevance of which remains of pronounced interest. Topics for individual presentations may include, for instance, tensions between Moscow and Constantinople regarding the Kievan Metropolitanate; contacts and tensions between the churches in Macedonia and Constantinople, or Serbia and Constantinople; the relationships between Greeks and Slavs concerning the Church unions of fifteenth and sixteenth centuries; comparative understandings of the idea of the Orthodox Emperor in the Greek and Slavic worlds; comparative understandings of holiness; and Greek ecclesiastical stereotypes of Slavs vs. Slavic stereotypes of Greeks, which historically have sometimes contributed to hindering unity.