Women in the Orthodox Church Group

Dr. Carrie Frederick Frost is an Orthodox Christian theologian who attends to matters of women and mothers in the church, sacraments and practice, the reinstitution of the ordained order of deaconesses, Christian material culture, and contemplative prayer. She received a PhD in Theology, Ethics, and Culture from the University of Virginia and she teaches at Western Washington University and Saint Sophia Ukrainian Orthodox Seminary. She is the author of Maternal Body: A Theology of Incarnation from the Christian East (Paulist Press, 2019), the editor of The Reception of the Holy and Great Council: Reflections of Orthodox Christian Women (GOARCH, 2018), and the Book Reviews Editor of Journal of Orthodox Christian Studies. She is the board secretary for the International Orthodox Theological Association and serves on the board of Saint Phoebe Center for the Deaconess. 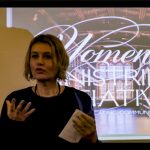 Elena Narinskaya’s main research interest lies is in the area of Scriptural studies / Biblical exegesis within the context of three monotheistic religions, i.e. Judaism, Christianity and Islam. She has previously worked with early Jewish-Christian interpretations of Exodus in the fourth century Syria and Palestine, and published her first book on the basis of her PhD in 2010. Since then she started researching the Qur’anic presentation of the Exodus stories. She has recently submitted her third monograph to Rutledge on the stories of Moses in Jewish, Christian and Muslim sources.

She studied Judaism and Hebrew in Jerusalem in 1999-2000, which was followed by completion of an MA programme at the Centre for Jewish-Christian Relations in Cambridge in 2002. She also studied Syriac language and Syriac Christian tradition of biblical exegesis in Cambridge. At Durham University she completed a Doctorate in Biblical Exegesis in Syria and Palestine in 2007, which was followed by Post-Doctoral Licentiate in Divinity from the University of Wales, Lampeter (2008-2011). She also studied Arabic and Tafsir Qur’an at Durham University and in Alexandria, Egypt. In 2012-2015 she held a research position at the Centre for Muslim-Christian Studies in Oxford where she worked on her third monograph. For an academic year of 2015-2016 she moved to Dublin City University in Ireland where she worked on creating the Centre for Interreligious Dialogue. From October 2017-Aug 2018 she worked on her fourth monograph at Clare Hall, Cambridge University, holding a position of a Spalding Research Fellow. For the academic year, 2017/18 she was invited to Ruhr-Universität Bochum as an academic research fellow. Since December 2018 she holds a position of an Associate Member of Theology Department at the University of Oxford.

Women-apostles, martyrs, saints, nuns, deaconesses, prophets, teachers, mothers, and grandmothers have played an important, active, and courageous role in the Orthodox Church throughout its history. They spoke publicly and resisted the powers and authorities of the world; they proclaimed the Gospel; they supported local communities in various ways, including spiritually and economically; and they influenced the historical route of Christianity in the world.

In settings where Orthodoxy constitutes the traditional form of Christianity—such as Eastern Europe and the Middle East—and in settings where Orthodoxy has spread—such as twentieth-century Orthodox communities that were formed and acculturated in such places as North America, Oceania, and Africa—their role in the transmission of faith in the heart of the family, as mothers and educators, has been essential.

Today their role extends throughout the Orthodox domain. Women, either alone or in equal partnership with male catechists, work in religious education. They sing in the choir, serve as choir directors, parish educators, and parish leaders. They are members of the parish and diocesan councils, and, in some cases, members of the diocesan assembly that elects the bishop. Orthodox women scholars teach at secular universities as well as Orthodox seminaries, and are involved in preparing male seminarians for the priesthood. They serve on ecumenical commissions, and represent Orthodoxy in a wide range of public, sacred, and secular capacities.

In recent decades, an increasing number of male and female scholars have turned their attention to studying matters of women in the Orthodox Church historically and theologically. Such attention has required acknowledgement of the Church’s imperfect record when it comes to its conduct towards women throughout its history.

Deep contradictions exist within our Orthodox tradition. The liberating message of the Gospel exists alongside restrictive local practices; the spiritual and personal theological doctrine of humanity exists alongside stereotypes of gender inherited from patriarchal societies. The women who brought the spices to the tomb on the first Easter morning were the first to announce that Jesus was risen and are honored in the Orthodox Churches as “apostles to the apostles,” yet the reading of the Gospel in public worship is still limited to male ministers. It is now the kairos moment to re-examine the androcentric prejudices in Orthodox tradition that have determined attitudes and praxis of the Church. The IOTA Women in the Orthodox Church group will facilitate scholarship that fosters such efforts.

The IOTA Women in the Church Group aims to bring together Orthodox theologians and scholars, women and men, in order to support theological scholarship on matters related to women and their role in the Orthodox churches. Additionally, we seek to create opportunities for discussion and articulation of the biblical, historical, theological, anthropological, canonical, and sociological roles and ministries of women in the Church—past, present, and future. Last but not least, we look for ways to increase the presence of women and amplify their voices not only in the academy, but also in the spiritual and liturgical mission of the Orthodox churches today.

We will encourage both the participation of women in every aspect of the Orthodox Church, as well as the scholarly efforts of those studying women in the Church—particularly working to connect international scholars whose work is complementary. We look creatively and hopefully to the future, knowing that this is an area of study in the Orthodox churches that will be particularly fruitful for the mission and flourishing of the Orthodox churches in the twenty-first century.