David Bentley Hart,That All Shall Be Saved. Response to the book and its reviews by Andrew Geleris, M.D. 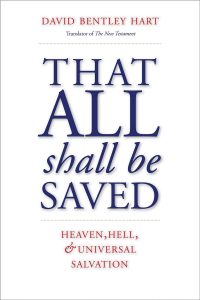 The following is a response to David Bentley Hart’s book That All Shall Be Saved and the subsequent excellent reviews by Fr. Michael Plekon and Dr. David Ford. I would like to suggest that important pastoral reasons may account for the Orthodox tradition’s conflicting perspectives concerning the existence of an eternal hell. I would also like to add a thought about the issue of free will and then about how we Christians view the topic of hell in our relationships with other people.

In his book Christ the Conqueror of Hell, Met. Hilarion Alfeyev notes some of the disparate patristic and liturgical perspectives on the issue of the eternity of hell. Commenting on the significance of the descent of Christ into Hades, he writes:

St Gregory Nazianzen did not answer the question: “Will Christ save all or just the faithful?” St Amphilochius of Iconium believed that all those who were in hell followed Christ after his descent and preaching. Theologians of the Alexandrian tradition were inclined to believe that God “redeemed and led all of us out of hell,” or rather, the entire human race from death. Clement even numbered pagans among the saved. St Romanos the Melodist and St Ephrem the Syrian maintained that after Christ’s descent into Hades “all tombs were opened and all the dead came out of them and rejoiced.” St Hippolytus of Rome, on the contrary, wrote that Christ preached only to the “souls of the saints,” and St Cyril of Jerusalem believed that through Christ “all the righteous swallowed by death were redeemed.” According to St John Damascene, Christ preached to all of the dead, but for some his preaching led to salvation while for others it only exposed their unbelief.

As in the writings of the Eastern fathers, we find several different answers in the hymns of the Octoechos… the texts of the Octoechos very frequently (perhaps in thirty-five out of one hundred cases) speak of how Christ led all people out of hell… Liturgical poetry gives no clear answer to the question: did all in Hades respond to Christ’s preaching, follow him, and receive salvation?1

After citing the above conflicting testimony Met. Hilarion ultimately concludes, “The services of Great Saturday raise the curtain of a mystery that cannot be solved. The answer to this mystery will be revealed only in the kingdom to come.”2

Most discussions concerning the issue of the eternity of hell address the topic from a theological perspective. St. John Chrysostom, however, approaches it from a pastoral standpoint. He suggests that our divergent theological viewpoints apply to different contexts. Chrysostom himself describes this variable contextual application as constituting a “paradoxical statement…but true for the piety it reveals.”

God is good to everyone, but He shows His patient endurance especially to those who sin. And if you want to hear a paradoxical statement—paradoxical because it is not customary, but true for the great piety it reveals—listen. God always seems to be severe to the righteous but good to sinners…If He frightens the sinner who persists in sins, He brings him to desperation and to the exhaustion of hope. If He blesses the righteous, He weakens the intensity of his virtue and makes him neglect his zeal, since he considers himself already blessed. For this reason He is merciful to the sinner and He frightens the righteous…If He sees someone who has fallen, He extends a loving hand. If He sees someone standing, He brings fear upon him…He establishes the righteous one with fear, and He raises up the sinner with benevolence.3

The scriptures clearly proclaim the blessings of obedience and the suffering produced by sin, e.g. Deuteronomy 28, Psalm 1, and Psalm 112. On this basis Christian leaders have the clear scriptural authority to use the threat of God’s punishment for sin, such as hell, to encourage the repentance of wicked sinners, atheists, and enemies of the Church. In the Gospels, however, Jesus most often displayed enormous solicitude towards sinners, as well as the poor and powerless, while frequently and severely chastising the spiritual elite and the powerful rich. Chrysostom likewise suggests that God prioritizes threats of punishment to the righteous rather than sinners. Who then are the righteous in our own day among whom God might find one who “considers himself already blessed” and whom “He establishes…with fear”? Might they be among the same two groups, religious leaders and the wealthy, that evidently most concerned Jesus during His earthly ministry? Perhaps Jesus still feels that these are the people who most urgently need immunization against the spiritually lethal “vocational risk” of pride. Clergy face this risk not only as a result of virulent demonic assault, but also because they have the easily accessible personal temptation of knowing that they have received their ordination precisely because they have already demonstrated spiritual maturity. The wealthy and powerful risk experiencing pride as a result of the common worldly temptation to believe that they have gained their success largely through their own efforts rather than the synergistic cooperation of the providence of God (Deut 8:18).

I would like to add a perspective concerning the issue of the eternity of hell as it relates to free will that arises out of painful personal experience. The terms “universalism” and “universal salvation” may inadvertently connote an inevitability to salvation that does not adequately respect the importance of human free will. David Bentley Hart articulately discussed in his book the fact that many people have suffered such terrible distortion and corruption of their capacity for free will that they lack the true freedom required to embrace God’s salvation. For example, victims of childhood physical or sexual abuse often end up with warped perspectives concerning authority figures, including the ultimate authority figure, God. The Synaxarion’s frequent mention of the detail that various saints were raised by pious parents confirms the spiritual importance of such early childhood experiences. In addition, people who have experienced unspeakable evil at the hands of baptized Christians may also find it impossible to embrace the Christian faith without severely compromising their personal integrity. The only cure for such free will impairments may be a powerful experience of the humble, compassionate, and generous love of God. Those who do not experience such love during this life may have to wait for an opportunity to arise after they die when they no longer “see in a mirror, dimly, but then face to face” (1 Cor 13:1). Only then will it even be conceivable that such people might have the capacity to rightly respond to God’s offer of salvation. This may be an important purpose for the frequent liturgical and private prayers of God’s people on behalf of the departed.

Most theological and pastoral teaching concerning hell is provided by those relatively confident of their own eternal destiny in heaven. Hell, therefore, tends to be a discussion that involves the potential destiny of others. When such discussions become essential for the sake of catechesis or some other reason, I would commend two attitudes of heart regarding the relationship of the teacher to the student. Met. Anthony Bloom describes the first:

After the war a document was found in one of the concentration camps. It was written on a torn sheet of wrapping paper by a man who died in this camp. And the substance of his message was a prayer in which he said, “Lord, when you come as a Judge of the earth, do not condemn the people who have done such atrocious things to us; do not hold against them their cruelty and our suffering, their violence and our despair, but look at the fruits which we have borne in patience, in humility, in fortitude, in forgiveness, in loyalty, in solidarity; and may these fruits be accounted unto their salvation.”4

The second helpful attitude of heart is illustrated by the story of St. Anthony and a cobbler.

St. Anthony had prayed to the Lord to be shown to whom he was equal. God had given him to understand that he had not yet reached the level of a certain cobbler in Alexandria. Anthony left the desert, went to the cobbler and asked him how he lived. His answer was that he gave a third of his income to the Church, another third to the poor, and kept the rest for himself. This did not seem a task out of the ordinary to Anthony who himself had given up all his possessions and lived in the desert in total poverty. So that was not where the other man’s superiority lay. Anthony said to him, “It is the Lord who has sent me to see how you live.” The humble tradesman, who venerated Anthony, then told him his soul’s secret: “I do not do anything special. Only, as I work, I look at all the passersby and say, “So that they may be saved, I, only I, will perish.”5

When St. Anthony subsequently received questions about who was going to hell he typically replied, “Hell is for me alone.”

The cobbler’s self-offering love on behalf of others is not idiosyncratic to his own spiritual journey. When praying for God to forgive the apostasy of His people, Moses said, “Yet now, if You will forgive their sin—but if not, I pray, blot me out of Your book which You have written” (Ex 32:32). To the Romans Paul wrote, “For I could wish that I myself were accursed from Christ for my brethren, my countrymen according to the flesh” (Rom 9:3). The self-offering sacrifice on behalf of others that Jesus incarnated on the Cross manifested the power of such love to bring about His own resurrection and our salvation.

When we discuss the topics of heaven and hell with those outside the Church, and even with “sinners” within the Church, these two attitudes of heart demonstrated by the concentration camp victim and the cobbler may work far more salvifically in the lives of hearers than the most brilliant scriptural, patristic, or theological insights. As St. Ephrem the Syrian said, “Humility is so great that even our all-conquering Lord could not conquer without it.”