Oleg Davydov, The Revelation of Love: The Trinitarian Truth of Being. Reviewed by Pavlo Smytsnyuk 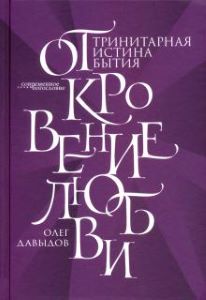 The publication of Oleg Davydov’s book The Revelation of Love: The Trinitarian Truth of Being [Откровение Любви: тринитарная истина бытия] sparked a scandal in contemporary Russian theology. The publication provoked an intense discussion that is still ongoing, both in academic circles as well as on blogs and social media. Many accused Davydov of not sufficiently grounding his claims in the Orthodox tradition and of suggesting that confessional boundaries are irrelevant. He was criticized for his “ambiguous dogmatic formulations” and attempts to promote filioque as acceptable doctrine within the school of Russian theology. This controversy culminated in the author’s dismissal from his position as professor at the Moscow Theological Academy.

This scandal has undoubtedly increased interest in Davydov’s book. Unfortunately, however, attention has generally been focused on a very limited number of Davydov’s propositions, excluding discussion of the argument and style of the book as a whole. This is very unfortunate, since it is the latter that displays an originality that can be regarded as a contribution to contemporary Russian theology. Creative and constructive theology is virtually nonexistent in the post-Soviet space. Davydov’s original approach is a positive exception.

Davydov’s key argument is that the remedy to the evils of modern and postmodern thinking can be found only in the Christian revelation: firstly, in the revelation of love between the persons of the Trinity, which is marked by giving and kenosis; secondly, in the revelation of God’s love in the economy of salvation. Creation is an analogical image of divine being, truth, and beauty. The analogia entis implies the goodness of the created world. Davydov’s main thesis is that “the Revelation proclaims the peacefulness of being, for the triune God [inherently represents] difference, and creation is the ecstatic expression of the immanent Trinitarian truth of being” (xiv). This thesis is developed in different ways throughout the book.

The book consists of 11 chapters, spanning 700 pages, covering questions of being, its transcendental attributes, and the relevance of Christian metaphysics; an analogy between being and God, the Trinitarian beauty, and truth and goodness; the difference in being and differences between the persons of the Holy Trinity; protology and creation ex nihilo; Christology, with particular attention given to kenosis—Christological and Trinitarian—and its relation to the question of suffering, evil, and theodicy in general; pneumatology; and, finally, Trinitarian eschatology. The book thus may give the impression of being an abridged Orthodox mirror of Balthasar’s famous trilogy, combining systematic theology with a reflection on the transcendentals.

The echoes of Balthasar are not coincidental. In fact, Davydov acknowledges his indebtedness to Balthasar’s work, as well as Hart’s, and to theologians of the Radical Orthodoxy movement. In particular, Davydov’s focus on theological aesthetics is very Balthasarian, while his polemics with modernity and postmodernity, as well as his attempts to rehabilitate classical and scholastic metaphysics, resemble some of the Radical Orthodox writers. The same could be said of Davydov’s prose, which is highly complex and sometimes too elaborate. However, once one gets used to his narrative style, the text is not devoid of a poetical rhythm, and is at times doxological. Even Davydov’s introduction and conclusion, where one might expect a more synoptic and schematic tone, are to a large extent hymns to divine beauty, peacefulness, and joy (and a list of “anathemas” against postmodernists). In fact, theology itself is defined by Davydov as “rhetoric” (xiii). Davydov often refers to Gregory of Nyssa, Augustine, Aquinas, and Bonaventure (Palamas is mostly absent), and engages in polemics with major philosophical figures of modernity, such as Hegel, Nietzsche, and Heidegger.

A central idea, which appears in almost every chapter of the book, is that diversity is good. Trinitarian faith implies that the difference and distance between persons within the Godhead are good and beautiful. Davydov then draws an analogy between the Trinity and creation: “The created world expresses the analogy of the divine tri-unity, while the structure of reality forms the ordo amoris. Being exists in a distance, which analogically expresses the immanent differences of the divine hypostases, for love exists only in distance” (247). This makes Christian theology a bearer of “a peaceful narrative of being, in which conflict and violence are not inevitable, but, on the contrary, accidental” (300).

This defense of difference makes the book an important contribution to current debates in Russia and many other majority-Orthodox countries regarding diversity. At a time when tolerance and diversity are under attack, Davydov’s insistence on the peaceful and nonviolent nature of difference, as a vision grounded in an Orthodox understanding of God’s being, provides a theological foundation for appreciation of diversity in an Orthodox context. Like Hart, Davydov contests the idea of the inescapability of violence: he insists on the goodness of creation and rejects that idea that evil, including violence, can be ontologically intrinsic to being itself (privatio boni). He then provides an alternative narrative, capable of emphasizing the peaceful character of the world and its plurality. Now, this argument is not irrelevant to the West. The current culture wars and polarization brought about by identity politics—ironically, in our age of celebrating diversity—demand a theological reflection. Davydov’s book provides an interesting voice in this undertaking.

However, there is a paradox in Davydov’s account of the goodness of creation and the peaceful character of difference, on the one hand, and the book’s polemical character, on the other. It is true that Davydov is significantly more ecumenical than his Russian peers, both in the sources with which he engages and in his view of theology as transcending confessional borders. Davydov does not “deem it necessary to repeat apologetically dogmatic formulas” and is against their transformation into “linguistic monuments” (xv–xvi). However, the overall tone of his book is very much directed against modernity. This contradiction is all the more striking since Davydov himself negatively characterizes polemics and “building apologetic bulwarks” which, so the argument goes, led Christianity to lose its attractiveness and become a “museum relic” (xxii). In this sense, one of the key shortcomings of the book is its inability to see that secular thought and modernity can also be bearers of divine truth and justice.

Like Socrates in Soloviev’s Plato’s Life-Drama, Davydov challenges both liberals and conservatives—liberals because of his critique of relativism and nihilism, conservatives because his work is a reproach to their uncritical obsession with past tradition. “You are right in defending tradition”—Davydov’s book tells conservatives—“the trouble is that you are bad defenders. You are defenders of accessories of the past, unable to comprehend or protect the very core of the Tradition” (my paraphrase of Soloviev). Traditionalism is criticized as “a typical postmodern reconstruction, a language game, rigid, dreary, lifeless,” which offers a “simplified static picture” capable of providing “emotional comfort and support [to one’s] identity” (653). Davydov argues that “the desire to preserve the status quo is natural, but not Christian, for Christ liberates both from the tyranny of the Heraclitean stream and from the mysticism of the immanent, singular moment. He preserves everything that is worthy of preservation” (654).

Paradoxically, the Russian Orthodox Church’s academic milieu, by expelling Davydov from its midst, has proven that in today’s Russia, difference and diverging theological voices lead to conflict. Moreover, even a work of scholarship with pronounced criticism of modernity can be deemed too “ecumenical” for contemporary Russian theology. However, The Revelation of Love should not be defined by the scandal it provoked, as Davydov’s work constitutes an important contribution to modern theology in and of itself, both within Russia and beyond.