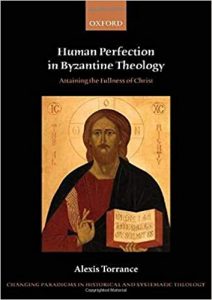 The goal of Torrance’s monograph is to explore the Christocentric character of Orthodox spirituality, tracing its historical development in Byzantine theology from the late conciliar period to the era of the Palamite controversy, and offering it as a starting point for contemporary systematic reflection. Torrance observes that several tendencies in modern Orthodox theology have severed anthropology from Christology, thereby “leaving open the possibility of theological shipwreck” (1). In light of this consideration, his monograph is a call for a paradigm shift in exploring various areas of Orthodox theological anthropology. These areas are the notions of personhood and communion, which have been a central concern for many Orthodox thinkers in the twentieth century; the doctrine of deification; and the Palamite teaching on the divine energies. Torrance claims that his study is historical as well as systematic, and observes that only an adequate historical understanding of the development of these notions can help contemporary Orthodox thought avoid all sorts of theological dead ends. One such speculative impasse, for instance, is the controversy between systematic theologians claiming that the writings of the Fathers contain a full-fledged theological personalism, and historians contending that it is simply not there. For Torrance, the solution is to reconsider what Orthodox theology has had to say over the centuries about the ultimate goal of the Christian life, reassessing certain themes—such as deification—whose meaning is often just assumed, “confusingly expressed” (2), and hardly ever problematized or discussed in conjunction with other competing “organizing principles” of Orthodox thought such as Palamas’s essence–energies distinction. Torrance believes that a critical reappraisal of what the Byzantine tradition had to say about human perfection—together with a reappraisal of its fundamentally Christocentric character—will also enable contemporary Orthodox thinkers to contribute in a significant way to the ongoing contemporary debates on the relationship between theology and anthropology.

Torrance opens his discussion with a defense of the “neo-patristic synthesis,” a term coined by the theologian Georges Florovsky (1893–1979), for whom theology meant a careful attentiveness to tradition, but also an openness to the problems of each new generation. Trying to downplay the popular narrative pitting Florovsky against thinkers such as Bulgakov and Soloviev, Torrance argues that his work “strives for a measure of continuity” (7) with Florovsky’s paradigm, setting out to reconstruct what the tradition had to tell us about the nature and purpose of the Christian life, but also hoping to highlight its enduring relevance for contemporary Christian thinkers and practitioners. Torrance claims that a problem with much Orthodox personalist theology today is that it seeks to develop a notion of subjectivity that is grounded in Trinitarian reflection or in a broader understanding of the image of God in humanity, but often takes its cues from continental thinkers such as Charles Renouvier (1815–1903) or Max Scheler (1874–1928) whose overall vision is marked by an engagement of the Western European sociopolitical context. Torrance views John Zizioulas’s well-known—and controversial—reading of Cappadocian Trinitarian theology as a crucial turning point in the development of Orthodox personalism. At the same, he finds that the contribution of the Metropolitan of Pergamon is ultimately lacking, as it fails to address the central role that deification in Christ has always played in the context of Orthodox anthropology. The theme of Christocentric theosis is then the guiding principle of the following chapters, which explore the thought of Maximos the Confessor (with a foray into the vision of Gregory of Nyssa), Theodore the Studite, Symeon the New Theologian, and Gregory Palamas.

Torrance opens his discussion of Maximos the Confessor by reviewing a number of modern authors—John McGuckin, Kallistos Ware, and Christos Yannaras —who lend their support to an “epektatic” vision of Christian eschatology (42–43). According to this understanding, the condition of the blessed is characterized by endless progress and growth in this life, but also after this life and following the last judgement. Torrance contrasts this approach, which is rooted in some passages of Gregory of Nyssa’s oeuvre, with the vision of St. Sophrony Sakharov (1896–1993), who strongly affirmed that in Christ “human nature was deified to ultimate perfection” (46) and came to enjoy “eternal rest.” Torrance argues that this vision is clearly found in the writings of Maximos the Confessor, thereby challenging the claim brought forward by other scholars—chiefly Paul Blowers—for whom Maximos’s eschatology, like Gregory of Nyssa’s, “contains at least a modified model of perpetual progress” (57). Torrance addresses Maximos’s reflections on movement and change in his work Ambigua, where they are viewed in opposition to the stable and unchangeable character of our eschatological condition (57–60), and his emphasis on the “Sabbath-like” quality of the deified state. Torrance’s conclusion is that while for Maximos the deified state may retain a dynamic component, this dynamism “does not imply such qualifiers as ‘growth’, ‘progress’, or ‘development’” (70). In this reading of Maximos, what sustains the saints in their state of “immovable deification” is “the fullness of the divine love” revealed in the person of the incarnate Word (80).

The ensuing discussion of Theodore the Studite focuses on the latter’s Christological reflections, developed in response to the iconoclastic crisis and articulated in his Antirrhetici, but also in his poetry, catechetical writings, and extensive correspondence. Torrance charts Theodore’s take on the vexed question of Christ’s humanity, which for him never exists in the abstract, but only in its various hypostatic instantiations (86). For Theodore, if Christ had assumed our nature “in general,” it could only have been “contemplated by the intellect” and our savior “would have been indistinguishable from all other members of the human species” (87). Theodore’s emphasis on the attainment of perfection “as a corporeal act” (103) is thus inextricably linked with the deified humanity of Christ, which is a model for the deified humanity of the saints. For Torrance, Theodore’s vision presents the divine economy of salvation as a sacramental event where “the Word embraces us in his humanity, and we embrace him with ours” (109)—a trajectory that is accessible to all, but shines to its greatest fullness in the Christ-like life of the monastery.

In a similar way, Symeon the New Theologian stresses that the incarnation of Christ is not merely a concept, but an event that is “fleshed out” in history, and as such deification must be “consciously fleshed out” among the faithful (118). In his Hymns, Symeon claims that the deified person is someone in whom “the content of the incarnation itself is repeated by grace” (129); each of us is called to follow the example of Mary and “become the ‘mother’ of Christ in a true and substantial way” (142). Torrance stresses that while Symeon emphasizes mystical and contemplative experiences, his call to perfection does not advocate an extra-ecclesial form of “spirituality,” but is strongly linked to participation in the Eucharist, which allows us to partake in Christ’s deified humanity (150).

Torrance’s discussion of Palamas, in line with his overarching argument, emphasizes the centrality of Christ’s humanity for the Palamite concept of deification by divine energy or grace. Torrance counters the anti-Palamite argument claiming that the author of the Triads had substituted “the concept of energy for the divine persons, specifically the person of Christ” (153). After tracing the lineaments of the hesychastic controversy, Torrance maps the development of Palamas’s theological epistemology, arguing that knowledge of God through the divine energy is “a thoroughly Christ-centered affair” (176). The divine energies that deify us are not “naturally participable” through creation, but are accessed through the Eucharistic gifts, which Palamas places even higher than the apostles’ experience on Tabor (184). Without the glorified body of Christ that is encountered in the Eucharist, there would be no access to the ideal of human perfection that is the ultimate goal of the divine economy (196).

In the conclusion, Torrance takes us through a complex and little-known twelfth-century Christological controversy that encapsulates the Byzantine preoccupation with the soteriological centrality of Christ’s humanity; he then offers a critical review of John Behr’s venture into constructive theology, which recovers the centrality of Christ’s Passion, but in his opinion fails to develop an adequate understanding of Christ’s humanity. Torrance closes his monograph affirming that Orthodox theological anthropology can only proceed if it holds fast to the vision of Christ’s fullness articulated by the authors he has reviewed, as the alternative is an infinite progress without a concrete goal (215).

Torrance’s monograph will be of great interest to all readers interested in learning more about the historical development of Orthodox theology and spirituality. Specialists and scholars of Eastern Christian thought will appreciate Torrance’s call for a historically grounded turn in Orthodox theology that does not merely rehearse uncritically the scholarly consensus on themes such as deification and eschatology, but engages the original sources in a faithful and creative manner. In the initial and concluding chapters, non-Orthodox theologians will also find a stimulating review of Orthodox personalism and the methodological debates dividing Orthodox theology in the twentieth century. Some readers may have reservations about the author’s take on the dialectic between “rest” and “progress” in the broader Orthodox tradition; while many scholars seek to reconcile Gregory of Nyssa’s notion of epektasis—never-ending progress in one’s knowledge of God—with the Christological understanding of deification in the writings of Maximos and later Gregory Palamas, Torrance claims that a notion of ongoing spiritual growth even after the eschaton is not explicitly supported by these later writers, and actually seems to contradict their claim that deification entails the acquisition of a Christ-like perfection. This reviewer wonders whether the tradition may not allow for a different interpretation—after all, Maximos’s positive affirmation of the soteriological value of change in response to the Origenist emphasis on stasis would seem to suggest an ongoing pursuit of theōria and praxis even after the eschaton, while of course affirming that the divine reality—in line with Gregory of Nyssa’s insight and its later Palamite rendition—can never be grasped fully, even by a deified intellect.

Torrance’s overarching intent, however, is not primarily philological; his goal is to demonstrate how the patristic and Byzantine reflection on the mystery of the incarnation remains at the core of constructive Orthodox thought. As such, this erudite monograph goes a long way towards bridging the divide between historical scholarship and systematic reflection; more specifically, it also proves the ongoing vitality of Florovsky’s “neo-patristic synthesis” as a methodological strategy for contemporary Orthodox theologians.