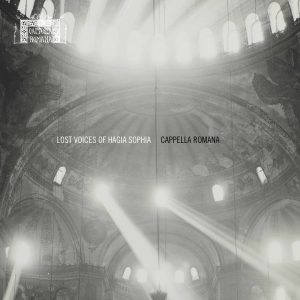 Orthodox Christians know the legend of the conversion of St. Volodymyr and the Baptism of Rus’ quite well. The prince’s emissaries returned from Constantinople, where they had participated in the liturgy of the Great Church. The emissaries exclaimed that they knew not whether they were on heaven or on earth. The myth about the experience of the emissaries suggests that their report of liturgical splendor inspired St. Volodymyr to adopt Greek Orthodoxy as the faith for the people of Rus’.

The legend of Hagia Sophia is not exclusive to the adoption of Orthodoxy by the city-states of Rus’. The edifice itself is an architectural marvel and a precious source for the study of urban liturgy and the sung offices of the cathedral rite. Historical memory has proven to be formidable for generations of self-identified adherents of the Constantinopolitan tradition. Cities like Kyiv and Novgorod erected Hagia Sophia churches on the model of the Great Church, making adjustments for the availability of local materials and architectural talent. Greek immigrant communities in North America have built revised copies of the original Great Church, dotting the landscapes of diverse locations like Oakland and the suburbs of Milwaukee.

The primary ingredient in the force of historical memory is the tradition of an incomparable sensory experience of worship in Hagia Sophia. Architectural and liturgical historians have enriched knowledge of the cathedral liturgy by drawing from medieval liturgical manuscripts, as well as diverse collections of histories, hagiographies, and patristic sources. The sole missing link in the assembled knowledge on Hagia Sophia was a reasonable reproduction of the actual liturgical experience, an opportunity for experts and non-experts alike to gain a sense of “what it was like” to attend liturgy at the Great Church.

An unprecedented ensemble of scholars and musicians have conspired to fill this gap with the publication, production, and release of Lost Voices of Hagia Sophia. The small, nondescript package does not do justice to the quality of the content in the collection, which consists of a Blu-ray disc, CD, and printed booklet. The Blu-ray disc includes a documentary film of 24 minutes.

The package is a crucial product of the unprecedented Icons of Sound project undertaken by two scholars at Stanford University: Bissera Pentcheva, professor of art history, and Jonathan Abel, adjunct professor at the Center for Computer Research in Music and Acoustics. Alexander Lingas of the City University of London and Capella Romana, and the vocalists of Capella Romana rounded out the project.

The CD packaging includes a small booklet with information printed in an excruciatingly tiny font size. The booklet features biographies; a list of performers; short articles by Pentcheva, Lingas, and Abel; the Greek texts and English translations of the repertoire; and a number of images. The packaging and booklet size limits the sheer amount of content that can be included, so some readers might be disappointed by the seeming absence of article-length academic rigor.

The authors deliver top-shelf essays despite the publishing parameters. Pentcheva sets the tone for her overview by describing the Great Church’s architectural configuration as an intentional design, enhancing the materiality of the edifice’s components so that they communicate the presence of the immaterial. Pentcheva uses the evocative metaphor of icons of sound, suggesting that the combination of a vast nave, high dome, elevated ambon, and marble revetments generates an incomparable reverberant acoustic that evokes the sound of divine presence (5–7). She notes that the sensory experience is complete—the participants hear the divine presence through wet acoustics, and the components of verticality, glitter, and marble produce an accompanying visual effect. Producing such a sensory liturgical effect is possible only with an elite choir that has a special stage (ambon) designed to enhance the participant’s experience. Five images accompany Pentcheva’s article, including a detailed reproduction of the interior configuration from Rowland Mainstone’s seminal study, and a stunning depiction of the view of the nave from above (Fig. 5). Pentcheva’s selected bibliography directs readers to the seminal works that expand her topic.

Lingas’s essay complements Pentcheva’s as he presents a helpful description of the function of chanters in Hagia Sophia, along with a brief description of the imperial city’s cathedral rite. He describes the chant books that would have been used for this rite, and acknowledges their scarcity in the extant manuscript tradition. The inclusion of a selection of chants for the feast of the Exaltation of the Cross that represent the liturgy of the Great Church are the finest treats of the collection. Readers and listeners are indebted to Lingas for his scholarship that led to the performance of these rare chants.

The essay by Abel and Elliott Canfield-Dafilou describes the technological process for creating an environment that could reproduce the audio experience of worship in Hagia Sophia. Abel’s description echoes Pentcheva’s discussion of the interior architectural components that contributed to the sonic experience. The technological investigation into the architecture, the musical performance, and the likely placement of the participant resulted in the simulation itself. The technical language of the short article might be inaccessible to some readers. In this respect, the brief documentary on the Blu-ray disc is enormously helpful, as Abel describes the process of recreating the acoustical performative effect in lay terms.

The final piece concerns the actual performance by Capella Romana. Fourteen singers, men and women, formed the ensemble for the performance. Lingas states that 25 cantors were on the roster of Hagia Sophia along with 40 deaconesses, according to sixth-century sources (14). The deaconesses performed certain selections, and the ordinary people participated in the parts of the liturgy appointed to them.

Cappella Romana is the premier performance ensemble specializing in the chant traditions of East and West. The performances on the recording represent the descriptions of the musical style accurately. The attentive listener gains a sense of the kalophonic singing representing the liturgical tradition of the Great Church and the periphery it influenced, including flourishes like extended melismas and vocables like teretismata (16–17). Detractors of the kalophonic tradition who prefer the balance of music and text that honors the semantic expression of the hymns might not enjoy the performative quality of the elongated phrases and sounds. The articles and performance introduce the attentive listener to a crucial aspect of the broader Orthodox tradition of liturgical music: the iconicity of sound itself as connoting the divine presence.

Does the performances of the Lost Voices of Hagia Sophia deliver an accurate reproduction of the worship experience at the Great Church? The product needs an appropriate physical space to provide a more complete sensory participation in Hagia Sophia’s medieval liturgy. Listeners mediate their engagement of the music and texts through headphones and speakers of varying qualities. It is simply not possible to reproduce even a copy of the original without some kind of corresponding space. Viewers gain a stronger sense of the complete worship experience from the performance at Stanford’s Bing Hall in the documentary film on the Blu-ray disc.

Pentcheva’s expression of regret that Orthodox chant is not permitted in Hagia Sophia is a necessary reminder of the enormity of the task of retrieving contextual evidence of the celebration of liturgy when confronted with tight restrictions (8). Nevertheless, symbols bring opposites together, however imperfectly, and the Lost Voices of Hagia Sophia provides a robustly informative and potentially transformative experience that gives the reader and listener a hint of what it was like to worship in the Great Church. The documentary on the Blu-ray disc is outstanding and is suitable for course syllabi in architecture and liturgy. Students and scholars of architecture and liturgy, and the ordinary faithful, are indebted to the authors and contributors of this groundbreaking project for taking a necessary and beautiful step in enhancing our knowledge of medieval liturgy in Constantinople.