To participate in the conference, follow these three simple steps:

1. Become an IOTA member here. Conference participation is open to members only.

2. Register for the conference here. Space is limited. Register early.

3. Reserve discounted housing here.  Space is limited. If you do not wish to commute, reserve your room early.

If you need a visa to Romania, contact Mr. Catalin Jeckel at [email protected] for supporting letter of invitation.

The Inaugural Conference of the International Orthodox Theological Association will take place in Iasi, Romania on 9-13 January 2019. The event has the support of the leadership of the Romanian Orthodox Church. In addition, the leaders of other Orthodox Churches look favorably upon the endeavor. The Inaugural Conference will begin on Wednesday, January 9, 2019, with a Te Deum Service offered by the Archbishop of Iasi and Metropolitan of Moldavia and Bukovina Teofan at the Metropolitan Cathedral at 17:15 (address: Bulevardul Ștefan cel Mare și Sfânt 16, Iași 700064, Romania).

The overarching theme of the Inaugural Conference is Pan-Orthodox Unity and Conciliarity. In response to our Call for Papers, we have received 250 proposals from scholars from over thirty countries, including Brazil, Hong Kong, Kenya, Lebanon, and New Zealand. The participation of scholars from Greece, Romania, Russia, Ukraine, the United Kingdom, and the United States was especially strong. Fifty Conference Sessions will feature the work of 300+ church leaders, scholars, and professionals. In terms of output and international representation, the Inaugural Conference promises to become the largest gathering of Orthodox intellectuals in modern history.

The Opening Ceremony will feature the Keynote Lecture by Metropolitan Kallistos (Ware) of Diokleia and will start at 18:30 at the National Theatre (address:  Strada Agatha Bârsescu nr. 18, Iași 700074, Romania). The Metropolitan Cathedral and the National Theatre of Iasi are a ten-minute walk (700 m) from the Unirii (Union) Square. The Conference will close in the evening of Saturday, January 12. All conference attendees are also invited to attend the Sunday Liturgy at the Metropolitan Cathedral. 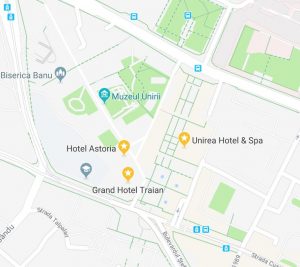 Walking path from the Unirea Hotel to the Metropolitan Cathedral

Conference Start/ End Dates & Times. Out-of-town conference attendees are advised to arrive before 15:30 on 9 January 2019 and depart at any convenient time on or after Sunday, 13 January 2019. If you wish to take part in any of the two optional excursions, you should plan to arrive on January 8 and depart on January 14.

Half-day Excursion, 9 January 2019. Cost: $35 per person. Pick up from the Unirea Hotel Lobby at 9:00 am. The excursion will include a tour of two museums at the Palace of Culture, the Three Holy Hierarchs Monastery (the site of 1642 Council of Iasi, discussed at the Conference), and the Cetatuia Monastery, and wine tasting. The participants will be back at the hotel at 14:00 same day.

One-day Excursion, 13 January 2019. Cost: $60 per person. Pickup at Unirea Hotel Lobby at 9:00 am. Dropoff at the end of the day, no later than 20:00. The excursion will include a visit to SIX monasteries, some of which are Unesco-designated historical sites: Varatec, Agapia, Gura Humorulu, Voronet, Humor, and Suceava Fortress.

Airport transfers. Taxi from the airport to the Union Square (Piata Unirii) hotels is €8-10 (35 lei) and takes about 5-7 minutes. The following taxi companies are authorized to provide service from the airport: Lux, Parma, Delta, Euro, and RVR. The taxi cabs wait outside the terminal. They do not need to be reserved in advance. In addition, Bus #50 provides regular service to Piata Unirii, where the hotels are located. The bus ticket can be bought inside the bus and costs €0.65 (3 lei).  There is approximately one bus per hour.  For the bus schedule, click here.

Housing. Discounted hotel rates are available to the IOTA members, who are registered for the conference. For information on how to reserve your hotel room at a discounted rate, visit this page.

The conference speakers will include:

The conference sessions will include the following topics: