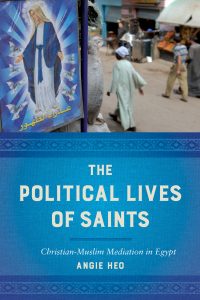 Orthodox Christianity, in its various global formations, has two features that are rarely brought together in thoughtful, intersectional consideration: saints as transtemporal mediators and how socio-political encounters, forces, and institutions both contour and are shaped by religious material practices. In The Political Lives of Saints: Christian‐Muslim Mediation in Egypt, anthropologist Angie Heo draws on thirty-four months of fieldwork with Coptic Christian and Muslim communities in Egypt. Her research, which was spread over a nine-year span, explores the political dimensions of saints and their sensorial and material power in shaping religious and national identity among Copts and Muslims.

Heo’s rich ethnographic data, combined with her use of theoretical ideas from the anthropology of media, material studies, and political science, offers readers a critical exploration of the different registers of mediation that take place during the processes of saintly veneration. In doing so, she calls our attention to this transtemporal domain as a site through which the differences, unity, exclusion, and belonging of worldmaking are expressed during crucial political moments in Egypt’s history, including the Mubarak era, the revolution of 2011, and various ISIS terrorist attacks in the latter half of the 2010s. The saints, the Virgin Mary, and other celestial figures become key actors in the framing of identity and representation among marginalized Coptic communities. In other words, the saints provide a means of social unification between Copts and Muslims, while also serving as corporeal, material, or sensorial sites of religious contestation and difference. While the historical and ethnographic particulars of Heo’s work are dense and vivid, filled with stories that seem to leap from the pages of her monograph, I want to focus our attention on two important aspects of her research—materiality and theology.

In the vein of materiality studies, Heo focuses on relics, apparitions, and saints as vehicles through which we can arrive at new understandings of how authority, conflict, and fear are often embedded into social and academic discourses about Coptic Christianity. These three topics create the scaffolding of her book, creating a sense of continuity by developing the various ways in which the material and sensorial elements are embedded into the religio-political interactions between Muslims and Copts. Heo’s work on Coptic Orthodox iconography, relics, and saintly appearances is part of a growing literature on Orthodox Christianity (Eastern and Oriental) that embraces material studies to understand the relationships among various actors in transtemporal social networks—believers, non-believers, hierarchs, and saints (among other celestial figures). Heo also uses the lens of materiality to think about how Muslim imaginaries are created and sustained, within, next to, and in opposition to Coptic imaginaries. By drawing out the ways in which material connections to spiritual life are expressed, defended, maintained, and accepted, Heo suggests that we can learn more about the politics of belonging, coexistence, and even nationalism. Thus, relics seem to become monuments of national unification, apparitions strengthen interfaith spiritual connections, and icons offer us windows onto how religion is practiced and controlled in particular geopolitical and hierarchical religious spaces.

Through ethnographic vignettes and social histories, Heo offers us a window onto two important and interconnected domains of worldmaking: the nation and the socio-religious imaginary. These two spaces often are brought together, in Heo’s estimation, by the political dimensions of holy, iconographic images, artifacts, and appearances. Drawing us into the lives of Egyptian Christians and Muslims, Heo shows us how the fraught terrain of Egypt, often marked by conflict and war, also has space for the optic and tactile religious veneration that are part of Islam and Coptic Orthodoxy in various ways. In Chapter Four, Heo pulls her readers into the world of folk spirituality, showing us how the delineations between Coptic and Muslim identification, between the earthly and spiritual realms, and between nationhood and personhood are often more plastic than we realize. Heo’s material attentiveness to the social history and the paradoxical lived realities of Copts and Muslims in Egypt is set within larger discourses of religious difference and secularism that are part of the negotiation of identity and worldmaking. Firmly engaged with the anthropology of media and materiality, Heo’s work challenges us to think about how large scale issues of sectarianism, dispossession, and coexistence are often negotiated and actualized in and through transtemporal, imaginative connections to religious figures, to saints. These imaginaries are not separate from religious or secular institutions; rather the capacity of these imaginaries to expand and proliferate is often policed by these institutions. Thus, holy images are political, holding within them the ability to deconstruct difference or exacerbate exclusion.

Throughout her book Heo focuses on creating an analytical framework for investigating Coptic Christianity that attempts to push back against the representation of Egypt’s Copts as an embattled minority group fighting for stability and freedom. Her ethnographic vignettes of material practice and veneration accomplish this goal quite well. Yet, Heo’s limited analysis of Coptic theology as a primary part of the cult of saints creates a one-dimensional representation of Coptic agency and belief.  Heo’s work falls flat for me when she begins to approach theology. Certainly, Heo has a command of the vocabulary of theology and its vernacular manifestations, and she also has an excellent grasp of institutional church history. At the same time, however, while she makes mention of theological ideas, Coptic spiritual traditions, and Muslim folk practices of piety, Heo often engages with semiotics as a way to read the data anthropologically. Adding in a layer of theological analysis would provide another dimension to her ethnographic narratives—one that is often missing from much of the research found in the subfield of the anthropology of Christianity.

Heo’s failure to fully articulate the theological complexities of Coptic life in Egypt is a symptom of anthropology’s estranged relationship with theology. By and large, anthropologists of Christianity often fail to engage the theological dimensions of their interlocutors’ lived faith and practices. There is an impetus in the subfield to steer clear of studying theology, which most anthropologists believe has, in some ways, tainted the rational, scientific endeavors of the social sciences. Yet, the holy materiality and sensory cultures of Orthodox Christianity are not only representational; they are living forms of religious kinship, transnational political ideologies, and theological precepts. Materiality is embedded into the life-worlds of Orthodox Christians, manifesting theological, cosmological, and social ideas and values. If we ignore the relevance of theology in the lives of our interlocutors, we are missing valuable parts of their life stories and social histories.

While studying the materiality of Orthodoxy may seem like an obvious avenue for research, the addition of theology is a new way of understanding and contextualizing Orthodoxy that can be both beneficial and (to some) problematic. It is useful to remember that Orthodoxy has a living theology, which means that Orthodox Christians are ontologically oriented by the doctrinal teachings of the Church. Thus, one cannot talk about Orthodox cultural practices without talking about theology, for in many respects they are the two sides of one coin. However, at the same time, anthropologists must be mindful not to fall into a religious studies framework, which, until recently, just as conversely privileged theology above the ideas and words of everyday practitioners.

Orthodoxy must be subject to queries beyond materiality and theology, for religion is caught up in a variety of social, political, and economic issues. Theology must not be allergic to anthropology. In order to understand the ways in which Christianity relates to neocolonialism, secularism, and neoliberalism, among other important topics that affect contemporary religious communities today, religio-political practices, beliefs, and ideas must be in conversation with social scientific theories of culture and society. This is something that Heo realizes quite well. Heo’s exceptional social research skills provide us with another piece of literature that works to create a more generous, engaged, and inclusive anthropology of Christianity. Among other things, her book offers a helpful guide for thinking about the nomenclature of Christianity in anthropology, and how we might overcome the longstanding West/East, liberal/conservative dualism that pervades our conceptions of what is taxonomically Christian.

For Heo’s thoughts about her own work, I direct IOTA readers to an interview I (along with Dr. Candace Lukasik) conducted with the author for New Directions in the Anthropology of Christianity.