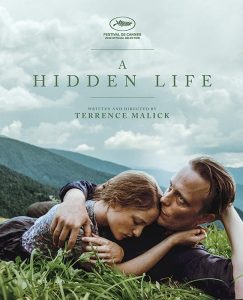 Managing Director’s Note: Terrence Malick is widely regarded as one of the most theologically sensitive and contemplative filmmakers of our time, and such films as his Tree of Life have already been the subject of theological as well as cinematographic inquiry. For this first film review for the IOTA Forum, we consider his most recent film, A Hidden Life, to see how this medium might capture and amplify theological themes of interest to Orthodox viewers.

With his scaffold, ladder, brushes, smock, and paint, a local artisan labors to restore the faded and sun-bleached iconography of his modest parish church while a young man watches beside him. “I help the people imagine that if they lived in Christ’s time, they wouldn’t have done what the others did,” he whispers to the young man. “I paint their comfortable Christ with a halo over his head. We love him. That’s enough. Someday, I’ll paint a true Christ.”

The young man whom the artisan addresses is Franz Jägerstätter. The year is 1940. In less than four years, Jägerstätter will be executed for his refusal to swear an oath of loyalty to Adolf Hitler.

A Hidden Life, Terrence Malick’s latest film, may well be interpreted as his own attempt to present a portrait of the true Christ, a Christ who remains anonymous to all those around him. He is an object of their scorn, their outrage, their disgust. At the hands of his neighbors, he is handed over to the occupying regime and murdered. Malick’s cinematic portrait of Christ, refracted through the life of Franz Jägerstätter (a beatified martyr of the Roman Catholic Church), is an unsettling one. Indeed, one can hardly watch the film without drawing obvious parallels to the political and cultural situation of our own time. As he walks the familiar streets of his Austrian village of Sankt Radegund, Franz is reduced to a stranger whose lifelong neighbors and friends have become suddenly (at times quite literally) drunk on the fervors of nationalism, xenophobia, ideological racism, and cult of personality. A Jewish neighbor, now fearing for his survival, asks Franz—as many of us today ask—“Is this the end of the world? Is this the death of the light?” When he is asked to enroll for military service and to swear loyalty to Hitler, Franz seeks moral clarity from the Church, only to be rebuffed for his conscientious objection and told that his sacrifice will “benefit no one.” Yet, for all the parallels which Malick invites between our time and that of Franz, the film repels any inclination of the audience to reduce it to a parable of mere political resistance. Rather, the film’s logic obeys that of an icon—resisting any aspiration toward fulfilling the expectant gaze of its viewers, but instead redirecting our gaze elsewhere.

Franz does not repudiate the appeals of those friends, family, and clergy who beg him to think on the consequences which his actions will inevitably have for the future of his wife and his children. Nowhere does Franz offer a speech which would reveal the inner rationale guiding his refusal to take the oath, despite the verbose warnings, threats, and condemnations of others. In fact, the most notable attribute of Franz’s characterization in the film is his overwhelming silence, which remains unyielding to the exasperation of the audience who, like Franz’s lawyer, his priest, and his mother, desperately seek to be consoled by an offering of transparent motives. Those seeking after an image of Franz as anti-fascist rebel or moral idealist are instead met with the impossibility of a silent martyr who witnesses to the sheer incommunicabilityof an unflagging faith and obedience to the hidden edicts of divine grace on his heart. Franz’s silence is the aching wound at the center of Malick’s film. It deflects not only the all too reasonable summons of bourgeois moralists who insist that taking an oath to Hitler is “only words,” but also the pleas of those who demand that he consider ethical compromises like obtaining the status of a non-combatant. Nonetheless, Malick (like Kierkegaard) aims to illustrate the unbridgeable chasm which separates the ethical from the religious, and in Franz, we find the very embodiment of a knight of faith whose election can only be reconciled with thought on the basis of its own gratuity and the veritable scandalwhich it inspires.

Malick’s Franz has seemingly been raised up as a living crucifix, a sign of contradiction which reveals not only God’s absolute freedom in election but the terrible reality of God’s judgment. As Franz is driven from trial to trial, his imposing silence—like the silence of God himself—draws out the poison from his prosecutors’ guilty consciences. Indeed, Franz’s would-be judges seem far less interested in the legality of what Franz has done than in the question of how Franz judges them. “Do you judge me?” asks the judge. “Is it pride? Do you think you alone are wise?” To this Franz says little. His life itself has become a kind of divine address to which all must respond either in repentance or with cold disregard. While his judges opt for the latter response, the film invites us into their point of view. Weare placed on trial by the miraculous life of Franz Jägerstätter and forced to confront ourselves in response to hisgaze, the gaze of the true Christ.

Despite the refrain of Franz’s judges that “no one will know what [he] has done,” we the audience are confronted with the fact that we do in fact know the story of Franz Jägerstätter. As such, we are ultimately forced to face up to the question of whether, in the end, the “hidden life” which the film names really is that of its central character. Once again, upon closer consideration it seems that Malick repels our gaze elsewhere. In the film’s closing coda, the true center of the film is revealed to be what may have been mistaken as its periphery—the hidden life of Franz’s widow Franziska. It is she who represents the tangibly Marian counterpoint to the remote and Christoform Franz. Franziska’s martyrdom, as opposed to her husband’s, is one suffered not in silence but aloud and with tears. It is Franziska who is left to pick up the pieces of a shattered family, disgraced and vulnerable to the animosity of thieving neighbors and the disparagements of her mother-in-law. Throughout the film, it is Franziska who remains close to earth, toiling to feed her children against the merciless environment of occupation and global war. The mark of Franziska’s hidden life of sanctity is her acquiescence to her husband’s witness against the powers of the world, her fiat which accepts abandonment, dejection, and ultimately his death, as a divinely ordained vocation rather than an act of rashness or pride. Yet, this acquiescence is not a passivity, a miraculous (even inhuman) obedience as exemplified by her husband. On the contrary, it is Franziska rather than Franz who commits herself to the world, to a life of motherhood, labor, and community as the arena in which the smallest affirmation of life becomes both a benediction and a defiant martyrdom. Confronted with the silent gaze of Franz, it is only in the hidden life of Franziska and her martyric “yes” that Malick finds a worthy response.